Jackie
Ah me name is Jackie White,
I’m the foreman of the yard
And ya don’t mess with Jackie on this quayside.
I’m as hard as iron plate,
Woe betide you if you’re late,
When we have to push a boat out on the spring tide.

Now they could die and hope for Heaven
But they’d need to work their shift
And I’d expect them all to back me to the hilt.
And if St. Peter at his gate were to ask them why they’re late?
Why, they’d tell him that they had to get a ship built.

Jackie & Men
We build battleships and cruisers (ah)
For her Majesty the Queen,
Super tankers for Onassis, (ah)
And all the classes in between,
We built the greatest shipping tonnage
That the world has ever seen,

Jackie
And the only life we’ve known is in the shipyard.

Jackie & Men
Steel in the stockyard,
Iron in the soul,
We’ll conjure up a ship,
Where there used to be a hole,

But we don’t know what we’ll do,
If the yard gets sold,

Jackie & Tom Dawson
For the only life we’ve known is in the shipyard.

Billy Thompson
Why are we makin’ nice with this bloke if he’s just out to shut us down?

Billy
It’s about bloody time he understood me then!

My name is Billy Thompson,
I’m shop steward for the Union
And me dream is proletarian revolution.
Comrades, brothers, fellow travelers and others,
Class struggle is the means of dialectic evolution.
And Das Kapital’s me bible
So the ruling class are liable,
And quoting Marx and Engels, it’s entirely justifiable,
If the workers revolution here is

Billy & Davy Harrison
Ever to be viable,

Billy
We become the rightful owners of the shipyard.

Jackie
Look, there’s a mixture of emotions,
Hatred, gratitude and pride,
And you hate yourself for crying,
But that’s difficult to hide,
For there’s a sadness in the launching
And ye worry what’s ahead
And that worry never leaves ye,
No, it keeps on nagging in your head.

So ye pray to God for orders,
But ye’ll worry till ya dead...
Until they bury your remains
In the blacksmith’s shed
And the only life ye’ve known is in the shipyard.

Men
Steel in the stockyard,
Iron in the soul,
We’ll conjure up a ship,
Where there used to be a hole.

Jackie
But we don’t know what we’ll do
If the yard gets sold,

Men
For the only life we’ve known is in the shipyard.

Peggy
My name is Peggy White,
And I’ve nursed them through their injuries,
And their cuts and wounds I’ve bound.
Busted arms, and busted heads,
Broken backs and broken legs,
I’d often put them in a splint
Before we put them in the ground.
And the fumes from all the welding
Where the poison air is hung,
And the toxic radiation
That’s been blackening their tongues,
I’d be giving them an aspirin,
They’d be coughing up their lungs,
It was all they ever got here in this shipyard.

Father O’Brien
Jackie. Far be it from me to intrude, but I’m wondering if I might say a few words.

Jackie
Of course, Father. The floor is yours.

Father O’Brien
Well, me name is James O’Brien, it’s from Ireland I was sent,
To be the pastor of this flock and your spiritual guide.
I might suggest to all of you heathens
What you might give up for Lent,
But ye won’t give up your dignity,
Ye can’t give up your pride,

And there are times when the good Lord might ask for sacrifice
But it’s the devil that be tempting ye, even if he’s paid you twice.
For their souls cannot be purchased as they haven’t got a price,
And they won’t give up

Father O’Brien
Mind you, I once gave up the drinking, was it 1963?
It seems as though sobriety was not the thing for me.
It was the worst three hours I ever hope to see.

Company
Steel in the stockyard,
Iron in the soul,
We’ll conjure up a ship
Where there used to be a hole.

Jackie
And the ship sets sail and the tail gets told
And the only life we’ve known is in the shipyard.

Company
Steel in the stockyard,
Iron in the soul,
We’ll get the bastard finished,
Or we’ll end up on the dole.

Company
Never minded working
In the rain and the cold,
Shootin’ rivets in the bulkheads,
Welding in the hold,

Jackie
But we don’t know what we’ll do
If the yard gets sold,
The only

Company
Life we’ve ever known is in the shipyard. 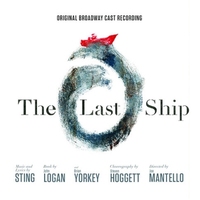