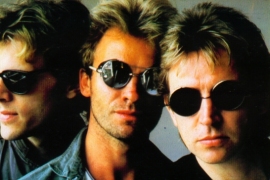 SANTA MONICA, Calif. (Jan. 30, 2007) -- In an historic GRAMMY® moment, the Police (Sting, Stewart Copeland, and Andy Summers) will reunite and perform together for the first time on the GRAMMYs when they open the 49th Annual GRAMMY® Awards telecast on Feb. 11, it was announced today by The Recording Academy®. With five GRAMMY Awards to their slate of accolades, the Police, one of the most famous bands in the world, create a purely original sound by infusing reggae with pop and rock -- a sound that will be heard 'round the world from the GRAMMY stage.

The Police join a stellar list of past GRAMMY Awards opening acts, which includes reunions and once-in-a-lifetime performances: the ever-animated Madonna sharing the stage with the Gorillaz (2006); an all-star, stage-filling spectacle that featured The Black Eyed Peas, Maroon5, Gwen Stefani, Los Lonely Boys and Franz Ferdinand (2005); Prince and Beyoncé in an electrifying duet (2004); and the reunion of legends Paul Simon and Art Garfunkel (2003).

The 49th Annual GRAMMY Awards are produced by John Cossette Productions in association with Ken Ehrlich Productions for The Recording Academy. Ken Ehrlich and John Cossette are executive producers, Walter C. Miller is producer/director, Tisha Fein is the coordinating producer, David Wild is the writer, and Tzvi Small is supervising producer. Musical directors for the telecast and pre-telecast are Rickey Minor and Larry Batiste, respectively.

Established in 1957, the National Academy of Recording Arts & Sciences, Inc., also known as The Recording Academy, is an organization of musicians, producers, engineers and recording professionals that is dedicated to improving the cultural condition and quality of life for music and its makers. Internationally known for the GRAMMY Awards, The Recording Academy is responsible for groundbreaking professional development, cultural enrichment, advocacy, education and human services programs -- including the creation of the national public education campaign What's The Download® (WhatsTheDownload.com). For more information about The Academy, please visit www.grammy.com.

Watch out for Grammy coverage on the following TV channels:

Jan 9, 2007
'Songs From The Labyrinth' European tour - Latest Fan Club ticket Sale info...
The remaining Fan Club ticket sales for all shows except Florence and Vienna - that is Paris, Basel, Antwerp, Milan and Rome - will take place at noon CET on Wednesday, January 10. Information regarding fan club tickets for the shows in Florence & Vienna will follow...
Read more
+