''It could have been a schmaltzy love fest or nerdishly technical. It wasn't. It had lightness to it, as well as a sense of occasion...'' The Times reviews 'Spectacle'... 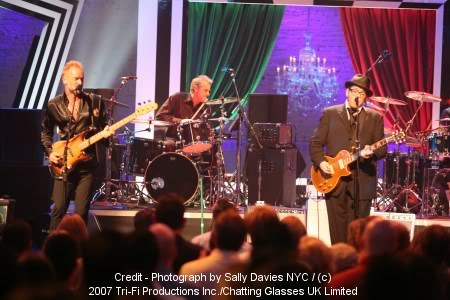 A year at Hogwarts wouldn't be enough time to explain to me the black art of television scheduling. For instance: on Remembrance Sunday some genius at the BBC decided to broadcast its Vera Brittain documentary a few hours early, meaning millions of viewers missed it. A more historical grudge - I nurse it to keep it warm, like Mrs Tam O'Shanter's wrath - dates from the Nineties when the BBC scheduled the decade's best two American sitcoms, Seinfeld and The Larry Sanders Show, so as to ensure the nation was asleep when they went out and years of future sales of box sets.

And now there is Spectacle, an event more than a programme that would have graced Christmas night on Channel 4, a treat to compare with the Parkinson that reunited the Goons. In this show, half Inside the Actors Studio, half an MTV Unplugged, Elvis Costello interviewed, and played with, all three members of the Police. My pleasure in this hour-long encounter perhaps locates my youth in the late Seventies more surely than carbon dating, but it would have been shared by millions had only they known it was on.

It opened with Costello singing, and beautifully, 'Every Breath You Take', a Police number, of course. Then the Policemen came on one by one, each representing a facet of the band's warring personality. Andy Summers was quiet and learned, no trouble at all. Stewart Copeland, the barmy American drummer, loudly claimed the band for himself. But the ownership dispute was quelled by the arrival of Sting, exuding authority, charisma and, less expectedly, humour.

Costello worried away at the fake reggaeness of their hit 'Roxanne'. Sting replied that his Geordie accent just sounded Jamaican. The real story was how the song had come to be at all. At the time, he said, all was punk and songs needed titles such as I am Going to Kill You, You Bitch. Costello's 'Alison' had given him confidence to sing a song with "a soppy girl's name". They sang 'Alison' together and I could have sworn Sting teared up, although he had an alternative explanation for his rheum. "When Elvis expresses himself vocally there is a lot of moisture around. Sharing a microphone with him can be challenging and when he says his aim is true - he is right." All four musicians ended by singing 'Watching the Detectives'.

It could have been a schmaltzy love fest or nerdishly technical. It wasn't. It had lightness to it, as well as a sense of occasion. Costello, his face framed by a fedora and sideburns, proved an able interviewer, his skills honed from standing in for David Letterman. And yet this gem of programme was thrown away at 12.05 this morning. Even more extraordinary is that it is part of a series recently made for the American Sundance Channel and acquired by Channel 4. Other editions feature Lou Reed, Smokey Robinson, Herbie Hancock, Tony Bennett and Bill Clinton. The next Spectacle is on tomorrow, even later, at 12.25. It features Elton John.

© The Times by Andrew Billen

Dec 9, 2008
Sting in Singapore... ''Sting from two perspectives'' says the New Straits Times...
Despite relying on electronic amplification - considered a sacrilege in classical settings - there was the intimacy of a chamber concert. Sting sang with an immediate, straightforward approach that placed emphasis on the text. I was impressed with his singing of 'In Darkness Let Me Dwell', a slow 'ballad' where he imbued his grainy voice with a dark melancholic texture, bringing out the sadness of the music...
Read more
+