PRS for Music launch 'The Art Of The Song' auction in aid of Teenage Cancer Trust - Contributions from over 20 leading songwriters including Sir Paul McCartney, Sting, Gary Barlow and Simon Le Bon... 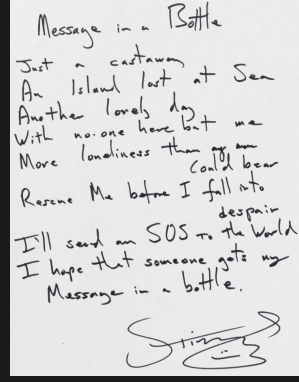 PRS for Music, the organisation that collects and pays royalties to its 75,000 song-writing and composing members, has announced an ambitious project to raise vital funds to help young people across the UK fight cancer.

Called 'The Art of the Song', the project has asked some of the UK's best songwriters and composers to donate lyrics from their greatest hits to be auctioned off at Bonhams in aid of Teenage Cancer Trust.

Sir Paul McCartney, Paul Weller, Jim Kerr, Sir Tim Rice, Neil Tennant and Annie Lennox are just some of the famous songwriters that have penned original lyrics from their most famous hits exclusively for the campaign. As well as raising money for Teenage Cancer Trust the project hopes to create a lasting legacy of the music and song lyrics of our generation.

Those keen to purchase the pieces will have the chance to bid on lyrics including Sting's - Message in a Bottle, Duran Duran's - Girls on Film and Sir Tim Rice's - 'Don't Cry for me Argentina'. Chris Rea has donated his original lyrics written for 'Road to Hell' famously penned on the M25.

Teenage Cancer Trust funds specialist teenage cancer units in NHS hospitals that are designed to give teenagers the very best chance of a positive outcome. There are currently 17 of these units across the country, including three in Yorkshire. The charity plans to build a further 16 so that all young people needing hospital treatment for cancer across the UK have access to the dedicated, specialist support they provide.

Teenage Cancer Trust has a strong music heritage. The charity's annual concerts have become one of the most eagerly anticipated events in the British music calendar. Now into their tenth year, the concerts were the brainchild of Teenage Cancer Trust Patron and The Who frontman Roger Daltrey CBE. Each year, the shows have featured some of the world's biggest bands and artists.

The auction will take place at Bonhams Knightsbridge on December 15th 2010 with items available to view from the PRS for Music site www.prsformusic.com/artofthesong.

For further information on the auction or to register interest please visit www.bonhams.com/entertainment

Those with pieces in the auction are:

Nov 18, 2010
To celebrate the release of 'Live in Berlin' Polaroid has launched a special sweepstakes for Sting fans to get first access to exclusive video footage from the Symphonicity tour and to have a chance t
Deutsche Grammophon/Cherrytree Records, in association with Polaroid, will release Sting's new live CD/DVD package entitled Live in Berlin, featuring the Royal Philharmonic Concert Orchestra, conducted by Steven Mercurio, on November 23. Culled from his critically-acclaimed Symphonicity world tour, this exclusive compilation features many of Sting's greatest hits, including "Roxanne," "Fields Of Gold, "King Of Pain" and more, all re-imagined for symphonic arrangement.
Read more
+

Live Nation is pleased to announce that Sting's critically acclaimed Symphonicity tour will add a fourth and final show in Sydney, with a second concert now confirmed for the Sydney Opera House Forecourt on Friday February 4.