The only question needing an answer heading into Sting’s Victoria debut on Friday night: Which version of the rock legend would show up?

The fiery Brit whose first band, the Police, produced an incredible number of hits over a six-year period? Or the easy-listening yoga practitioner whose last substantial hit was a decade ago?

Turns out he was a little bit of both at Save-on-Foods Memorial Centre.

Sting, 61, delivered a 21-song, two-hour set split evenly between Police hits and solo offerings. Not every song from both sides of his personality worked, but there was a uniqueness to many of the left-field choices that bookended his staple singles.

The rocking 'Demolition Man', from the Police’s 'Ghost in the Machine', was an aberration among the early mellowness, while the horn-heavy 'I Hung My Head', which Johnny Cash covered in 2002, gave the set a much-needed soul infusion. And the inclusion of 'Next to You' was sensational. Hearing the band rip into the first song on the Police’s 1978 debut was one of the many songs that defied expectations on this night.

But those gems aren’t what the sold-out audience of 6,573 paid to hear, which is why Sting and his solid backing band spent the majority of the set singing songs that practically defined radio during the 1980s and early 1990s.

(Actually, I don’t know exactly what this crowd came to hear, because a cemetery would have been livelier on this night.)

'Message in a Bottle', 'Wrapped Around Your Finger' and 'Roxanne' were expertly, almost effortlessly performed. But when he got to the trifecta ('King of Pain', 'Walking on the Moon' and 'Every Breath You Take') that came near the end of his set, it was impossible not to marvel at Sting’s hit-making abilities.

"You’re a lovely town," he said. "I’ve never been here before. I’m a virgin. A Victoria virgin."

At various points, Sting couldn’t conceal the fact that he has played the majority of these songs hundreds of times during his career. He flirted occasionally with adult contemporary sounds on songs that didn’t need them and decided to completely ignore his Grammy-nominated solo debut, 'The Dream of the Blue Turtles', and the hits '(If You Love Somebody Set Them Free', 'Love Is the Seventh Wave', 'Russians' and 'Fortress Around Your Heart') it spawned, which was an unnecessary oversight.

In the end, there’s no sense in thinking the Sting of 1983 is going to be the Sting of 2013, no matter how good he sounds. Whining about why he didn’t play this song or that one is a fruitless proposition: He touched on many facets of his career, from one of the first singles by the Police to their last - and on the night before 'Synchronicity', his final album with the Police, turned 30 years old, at that.

And when an audience member jumped upon the stage during 'Roxanne', Sting let her fly her freak flag for the duration. "That was a special, surprise treat," he said, sounding genuinely moved by the interpretive-dance experience.

Sting still has some get up and go, as evidenced by the news that he showed up unannounced Thursday at a yoga studio in Kelowna, hours before his Back to Bass tour opened. And, it should be said, he still looks incredibly great (Sting can wear the stuff out of a T-shirt and jeans, simply put).

What more do you want from a rock star with a cadre of hits and an honest-to-goodness desire to still play them for his fans?

Comments
4
You must be a logged-in member to add comments. Log In | Subscribe
June 08, 2013 posted by shari_underwood
Live
It was like Christmas.
June 02, 2013 posted by mjharris
living in a state of bliss..
It was Sting's first time in Victoria and my first time to see him live. He did not disappoint. We have been watching the "Live in Berlin" blue ray off and on for the past year. It is the best concert video we have ever enjoyed and the concert on Friday was the best concert that we have ever enjoyed. I am truly in a state of bliss, bathed in gratitude and white light. Thanks to all who made this concert a stellar moment for myself and my husband. Margaret
June 01, 2013 posted by Lisa68
Lisa68
I first saw sting when I was 12 yrs old. My mom took me to London to a Police concert. I have been a loyal fan and lover ever since! I have seen him 10 times! I was excited to see him this yr playing Victoria and brought my daughter with me as she has been surrounded by his music since her conception! To share this with her was a very special experience. I had struggled with cancer the last few yrs and have found inspiration within his music, I feel him and I are kinda soulmates in a way! When my prognosis was failing I spoke to my family about possible my passing and not having a funeral just a celebration and my song of course shall be my most favorite song.....fields of gold. To hear that last night and to be sharing it with my daughter made me so happy! Was a bit teary eyed... I just wish our seats had been a bit closer. We were on the floor and difficult to see. I thought the performance was amazing, the sound great. Was disappointed on the smaller crew he had with him this time around, no horn section or his 3 back up singers. It would of been great to have a couple of monitors so more easily seen. And the lights and everything were pretty low key this time around? Just cause it was a smaller venue? Either way, he is my love and as long as he is touring I will be there god willing! Come back soon! Namaste
June 01, 2013 posted by mjharris
from the front row...
We had the great good fortune of sitting about 8 metres from Sting and the band. I must say that it was an event of a lifetime..kind of like falling in love or your first view of your newborn. Today I am enriched, enlivened and energized. Keep at it old man, you got the juice and the stuff. Here's to 25 more!! Margaret and Craig, Victoria BC June 1, 2013
Newer comments    1 - 4 of 4    Older comments 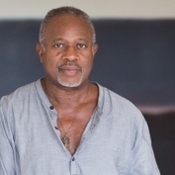 May 30, 2013
David Sancious hits the road with Sting and talks to the Times Colonist...

David Sancious has played with everyone from Bruce Springsteen to Santana, Seal and Bryan Ferry. Nine weeks of world travel started Tuesday morning for keyboardist David Sancious, who won't return to his home in Woodstock, New York, until the second week of August. Not that the 59-year-old is complaining. "When we go out on tour with Sting, it's as nice as it could be," Sancious said Monday, prior to departing for Kelowna and the start of Sting's Back to Bass Tour. "We fly in a private plane, most of the time, and with [an instrument] technician at our beck and call. But as high as it has gotten for me, I don't lose touch with the basics of what it means to be a musician..."