Sting has joined the elite - and ever growing - circle of venerated 80s rock stars who've turned to Broadway for their next act. Following the lead of Elton John (The Lion King, Aida, Billy Elliot), Boy George (Taboo), Cyndi Lauper (Kinky Boots) and Bono (Spider-Man: Turn Off the Dark), the Police frontman has written songs for a musical. Called The Last Ship, the production will be directed by Joe Mantello (Wicked, Assassins, Love! Valour! Compassion!) and heads to the Great White Way next year after a world premiere in Chicago.

Taking the stage in the first of 10 sold-out performances at New York City's 260-seat Anspacher Theater at The Public, the evening was an opportunity to both promote Sting's new album and debut the musical's songs, as he put it, "Before I turn them over to the actors."

Incredibly fit at 61, with his blond tufts now turned to a salt-and-pepper buzzcut, Sting looked more like Steven Berkoff for John Varvatos in his casual but clearly expensive white T-shirt and faded blue demin. Backed by a 14-piece band - that included five backing vocalists, two fiddle players, one accordionist, a drummer, bassist, guitarist, two actors (Jimmy Nail and Jo Lawry) and his musical director Rob Mathes on piano and acoustic guitar - the former Gordon Sumner captivated the room with his presence. But it was his music that truly stood out in an evening of songs and spoken word. Think: Behind The Music: Sting Goes to Broadway.

The musical, he explained, is based on his childhood in Wallsend, on the northeast coast of England, in a shipbuilding town where, as the singer put it, "Ships loomed over the houses." This image was driven home by images used during the performance. The premise of the piece is essentially about an industrial town that falls on hard times and how the people cope with the fallout. A troubling and very poignant, contemporary theme, though the piece is set in what seems like the early 1960s, when many shipyards in England actually did close.

Sting introduced various characters through song - a priest, a welder, various workers - and there was a very somber tone even beneath the livelier shanties. No wonder: much of the music is Celtic and fit right in at the local Irish pub's "heritage night."

Plucking away acoustically throughout the night, Sting introduced the song "Dead Man’s Boots" as one about the tradition of being grandfathered a valued job at the shipyard. A conversation between a father and his son, who does not want to take the job, turns into "What Have We Got," a bouncy jig Sting shared with Jimmy Nail and his backups.

One of the boldest, most exciting numbers of the evening was "Sky Hooks and Tartan Paint," the brief tale of a young shipyard apprentice sent on a fool’s errand for nonexistent items (for instance: "nail holes"). Performed by Nail, it set feet stomping, although, oddly, the song does not appear on Sting’s new disc, and is only available as a bonus track on iTunes and in a deluxe version. The album version features vocals by Brian Johnson, the iconic English singer for AC/DC, who grew up in the same area as Sting. Even more curiously, Sting never mentioned this during the performance.

The evening concluded, appropriately enough, with an encore of "All This Time" from Sting's 1991 album, The Soul Cages. The singer wrote the album after the death of his father and a period of writer’s block. Considering The Last Ship is his first album of original material in almost ten years, the pensive tone seems to reflect Sting’s current outlook, as his characters consider their lot in life, recall wonderful times and contemplate the future.

What Sting has created may not reach the chart-topping success he’s had with his former band or on his own, but he could very well give Broadway its next smash. 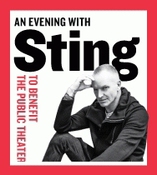