Sting, a classic in Granada…

Sting, a classic in Granada…

Last night Sting captivated an audience of 7000 unconditional fans at the Plaza de Toros of Granada (Bullring), accompanied by the brilliant Orquesta Ciudad de Granada, by a marvellous voice and an appeal that does not wear out over the years. The English musician did an unforgettable symphonic review of his most famous songs of the last thirty years. And the experiment of orchestrating rock, jazz and pop, with which it has already toured around the world, was a total success.

The British musician, that in 1977 founded The Police with Stewart Copeland and Andy Summers, and that after eight years launched his solo career, has been embarked on the “Symphonicities” tour for more than a year, coinciding with the release of the album of the same name, sponsored by Milenio in Granada.

The concert started with twenty minutes of delay due to some chaos at the entrance. Apparently, everyone arrived at the Plaza de Toros at the edge of ten and the confusion with the different doors did not help.

Sting started with “Every little thing she does is magic” and “If I ever lose my faith in you”, before introducing the Orquesta Ciudad de Granada and his own band: the vocalist Jo Lawry, Ira Coleman on bass, the guitar player Dominic Miller and the percussionist Rhani Krija. The third song “Englishman in New York” broke the ice and the crowd began to sing.

Gordon Sumner, who turns sixty next October, offered a smooth look: dressed with a white shirt, black trousers and a shaved head, the singer not only has preserved the voice with which he became famous almost 35 years ago, but also a thin fibrous and tough body which has to be attributed to a strict vegetarian diet or to the practice of yoga.

The only things that Sting has lost are some hair and a bit of memory for the lyrics. The most enthusiastic fans yelled “Handsome” and he did not abandon in the two hours and a half of concert, the seductive smile and the sexy pose -hip movements included-.

Among the songs played, there were several from his time at The Police, mythic themes such as “Roxanne” or “Message in a bottle” that Sting played the acoustic version to the end of the concert. And from that last album of the group, “Synchronicity” (1983), the songs “King of Pain” and “Every Breath You Take” were rescued.

However, there were more songs belonging to his time as a solo artist which began in 1985. The understanding between the British and the orchestra was perfect despite that the Orquesta Ciudad de Granada had rehearsed with the Director Chelsea Tipton but had not had a chance to meet Sting until yesterday afternoon, in a rehearsal under the sun. The composer spent the entire evening praising the orchestra and presented several of its soloists.

The role of the OCG grew throughout the performance; orchestral arrangements passed almost unnoticed in several songs of the first part before the break, but moved quickly from this condition to the forefront in songs such as “Russians”, “Why should I Cry?” or “The Cowboy Song”. In “Moon over Bourbon Street” the local musicians embroidered a “Horror Movie Intro” and the singer dressed in a sinister black coat with red lining, showed his role as an actor to play a beast unable to overcome its bloody instincts on full moon nights in New Orleans.

“Next to you”, “When we dance”, “Hung my Head”, “Fields of Gold”, “Shape of my Heart” or “King of Pain” were other songs with which Sting remembered his greatest hits from the late seventies, eighties and nineties.

“Every Breath you take” made the audience have an emotional outburst. Sting left for the encore “Desert Rose”, “She is too Good For Me” and “Fragile”, but with “Message in a Bottle” –from the unforgettable “Regatta de Blanc”- the entire Plaza stood up and sang.

The Bullring was maximized with chairs designed for short people like Spanish from the fifties, although good music relieved the discomfort. The 100.000 Watts of sound and 200.000 of lightning provided the technical quality to the talent of the performers. One screen on each side of the stage “democratized” the vision of what was happening on stage, but with an annoying split second of delay between sound and image. Some fans chose to follow the concert from outside the Plaza as tickets were sold out days ago.

(c) ideal.es by Ines Gallastegui (Very kindly translated by Maria Eugenia Estigarribia, Granada)
Comments
0
You must be a logged-in member to add comments. Log In | Subscribe 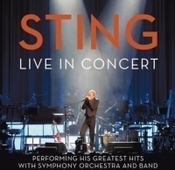 Sting performed his greatest hits with the Philarmonic and an enthusiastic audience who enjoyed a great concert sound. He mixed songs from the Police years with the most popular songs of his solo career. At last the dream was realised. After 10:00 pm, a half hour later than the appointed time, Sting started the concert in Gran Canaria Stadium that ended two decades of waiting. The chords of the Police song 'Every Little Thing She Does Is Magic' made the audience remember that they were in front of one of the great legends of british pop rock, the writer of songs known by millions...

Sting performed Police and solo hits including 'Roxanne,' 'Every Breath You Take' and 'Englishman in New York' in orchestral arrangement, bringing a sell-out audience at Montreux Jazz Festival to its feet. The fit 59-year-old Briton and his 'Symphonicity' tour delivered an energetic two-hour show on Monday night on the famed stage of the annual prestigious Swiss summer event. 'I'm very happy to be here with the Bochum Symphony Orchestra,' Sting, speaking in French, told the crowd of 3,300 fans of all ages, some of whom paid more than $200 for a seat in Stravinski Auditorium...