The 12 Days of Christmas - Rally for the Rainforest at our Online Christmas Auction...

'The 12 Days of Christmas', the RFUK's fabulous and exclusive public auction of gifts donated by celebrities, luxury labels and esteemed Foundation friends, returns for a fourth fantastic year! Open to everyone through an RFUK pop-up shop on eBay, the 12 day auction, running from November 20 to December 1, will offer various gleaming goodies for every savvy shopper ready to raise funds to protect the world's rainforests.

The auction can be found at www.ebay.co.uk/12days.

As well as countless surprises to be announced in the lead up to the auction launch, lots currently include: A catered day out at the Wiltshire Lakehouse Estate home from Sting and Trudie Styler, VIP autographed guest tickets to the filming of QI from Stephen Fry, signed goodies from Sir Bruce Forsyth and Mark Rylance, signed sporting goods from members of Arsenal, Chelsea and Tottenham Hotspurs FCs, Tea for Four in Parliament with The Rt Hon Zac Goldsmith MP, many course meals with wine from the OXO Tower Restaurant, Terre a Terre and the Michelin-starred Quilon, tickets for award winning London shows including Spamalot, Woman In Black and The English National Ballet's Le Corsaire, exclusive London Fashion Week items from Volcom, Emma J Shipley, Eda London, Heidi London and Begg Scotland, a stunning bracelet from Zoe & Morgan plus limited edition signed art from Rob Ryan, Kid Acne, Ben Frost, Eelus, Rosie Emerson, Graham Carter and a very rare 1 of 3 paint on canvas from acclaimed Beautiful Crime artists, Fin DAC and Russell Marshall and much, much more! This is just a sample of what is available at what will no doubt be a spectacular fourth year for the 12 Days of Christmas event. More lots to be announced soon via RFUK’s Twitter (@RFUK), Facebook and the RFUK website.
Comments
0
You must be a logged-in member to add comments. Log In | Subscribe

Nov 18, 2013
Launching the careers of two 'Northern Stars'...
Alan Hayward, an archivist at Tyne & Wear Archives & Museums has written an extremely interesting blog relating to Sting that is about the day that he saw the Queen Mother passing by to launch a ship, which he has referred to in a number of recent interviews and during the Last Ship performances at New York's Public Theatre. To read the blog and see some great photographs from the visit and launch of the 'Northern Star' visit http://www.twmuseums.org.uk...
Read more
+ 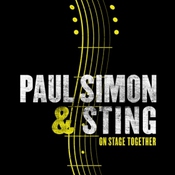 Nov 13, 2013
Sting & Paul Simon On Stage Together - Additional shows Confirmed - Boston TD Garden, March 3 & New York City Madison Square Garden, March 6...
As announced last week, Sting & Paul Simon, two of music’s most renowned and enduring artists, will perform On Stage Together on a tour throughout North America in February and March 2014. Live Nation Global Touring confirmed today that due to demand, there will be an additional concert in Boston on March 3rd at TD Garden along with a second and final performance at New York City’s Madison Square Garden on March 6th following an immediate sell-out in that city. Tickets for the newly announced Sting & Paul Simon: On Stage Together concerts will go on sale to the public next Friday, Nov. 22. The artists’ fans will have access to a pre-sale through their respective official websites, starting Thursday, November 14 at 10AM local time. American Express® Card Members will have an opportunity to purchase tickets before the general public...
Read more
+