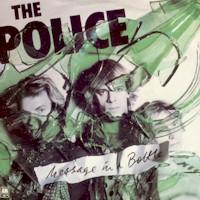 Sting is reportedly worth £200m. If you accept that his fortune was built primarily on the writing of 10 key hit singles of roughly four minutes each in length, that works out, on an admittedly crude measure, at £5m per minute of music. That's luck, some say. Well, yes, undoubtedly. But it is also about skill: in the late 1970s and early 1980s, Sting possessed an uncanny knack for coming up with songs that resonated both with mainstream radio and with rock audiences: by the time the Police went their separate ways in 1984, they were the biggest band in the world.

'Roxanne' was the song that brought them to the attention of American record-buyers. In their home country, the track that gave them their first No 1, and put them on course for global domination, was 'Message in a Bottle'. With a background in jazz and prog rock, peroxided hair (dyed for a chewing-gum commercial), songs that welded punk onto a diluted form of reggae and an age range of between 27 and 36 when 'Message' hit the top, the Police were seen by some as old farts trying to board the new-wave bandwagon, and raised as many hackles as they did roars of approval.

What shut the detractors up (or, rather, drowned them out) was Sting's artfully artless song, with its rock-driven verse, propulsive bridge and wide-open chorus, and the final refrain of "Sending out an SOS" (memorably sung back at him by the crowd at Live Aid in 1985). Teenagers latched on to the track and fancied the band.

Older musos appreciated Andy Summers's fiendishly fiddly guitar part and Stewart Copeland's bracingly unpredictable drumming. Radio rotated it. And Sting, wearing - as if already relishing the experience of goading his critics - a bow-tie in the video, preened. Plenty of people wanted to hate the single as much as they did the band; Sting's skill was to write songs that seduced £200m worth of them into surrender.

© The Sunday Times by Dan Cairns

Jan 22, 2009
Sting, Elvis and Sam Moore get soulful...
Sting's hectic schedule in Washington continued after his show closing performance of 'Brand New Day' with Stevie Wonder at the Neighbourhood Ball on January 20. Shortly after performing with Stevie, Sting headed over to The Harman Center Theater for yet another performance...
Read more
+

Jan 21, 2009
President Barack Obama Assures Americans 'Yes, We Will' At Neighborhood Ball - Mariah Carey, Sting, Stevie Wonder, Will.I.Am, Beyonc&eacute; and others gather to celebrate Obama presidency...
The two-hour event was broadcast live on ABC and featured a slew of celebrities, including Beyoncé, who performed 'At Last' for the president and his wife's ceremonious first dance. Stevie Wonder and Sting close out the show with 'Brand New Day'...
Read more
+