will.i.am and Sting Release New Versions of Protest Songs for The ONE Campaign...

will.i.am and Sting Release New Versions of Protest Songs for The ONE Campaign...

The ONE Campaign has released new videos of Grammy award-winning artists Sting and will.i.am, performing the songs "Driven To Tears" and “It’s a New Day” respectively, as part of the agit8 campaign to raise global awareness about extreme poverty.

The artists join more than 50 musicians – including Usher, U2, Mumford and Sons, Ed Sheeran, Bruce Springsteen, Macklemore & Ryan Lewis and others – who have released classic protest songs in an effort to highlight the power of music to change the world.

will.i.am’s new version of ''It’s a New Day'' was recorded in a studio in London, while Sting’s rendition of "Driven To Tears" was filmed on his Back to Bass tour at Chastain Park Amphitheater in Atlanta. Check out Sting's video at http://bit.ly/1cpu0eU and will.i.am's clip at http://www.youtube.com/watch?v=-03bHYiPRaQ. To see all the agit8 videos and learn more about the history of protest music, visit agit8 online.

ABOUT ONE
Co-founded by Bono and strictly nonpartisan, ONE is a campaigning and advocacy organization of more than three million people taking action to end extreme poverty and preventable disease… because the facts show extreme poverty has already been cut in half and can be virtually eliminated by 2030. Learn more at ONE.org.

Sting's latest project - an album entitled The Last Ship, inspired by his play of the same name - was informed by his memories of growing up in Wallsend in the shadow of the Swan Hunters Shipyard. In February 2012, a small local audience was invited to Newcastle's Live Theatre to witness an early reading of the play. The reading, which included new songs by Sting, was performed with a cast and musicians and gave the audience an opportunity to see how things were progressing. At the time, they would have been forgiven for thinking that the songs were nearly finished - in fact, the play and songs were, at that time, still in the early developmental stages, with exciting new improvements and additions to come... 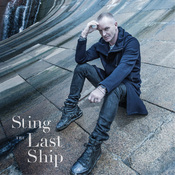 Jul 31, 2013
<i>The Last Ship</i> – Album Tracklistings!
We are excited to share with you the official track listings for The Last Ship album packages. The first single, "Practical Arrangement" is available now from iTunes. The exclusive super deluxe package of The Last Ship may be pre-ordered from Amazon and all versions are also available for pre-order from the Official Sting Store...
Read more
+