A cheering crowd, many tossing beach balls and Frisbees, filled Wembley Stadium tonight to watch a lineup of top rock musicians, including Bruce Springsteen, Sting, and Peter Gabriel, sing, dance and strut across the stage during the opening concert of Amnesty International's six-week international tour to promote human rights.

The audience leaped to its feet as the tour's five performers, who also include the American singer and songwriter Tracy Chapman and the Senegalese musician Youssou N'Dour, burst onstage and, accompanied by a drum and tambourine, chanted, "Get up, stand up, stand up for your rights."

And the crowd clapped in unison when Mr. Gabriel and Mr. N'Dour, both wearing brightly colored African vests, brought both of their bands onstage and sang together, accompanied by a boisterous African dancer. Many in the audience, waving umbrellas and balloons, danced and sang along with the musicians.

"This is a good concert," said Andy Skuse, a London fan who said he regularly attended rock concerts. "There's certainly a good atmosphere here, and the age spread is bigger than what you usually see at rock concerts here."

A capacity audience of close to 77,000 people packed Wembley for the concert, many of them sitting on canvas placed on the stadium's soccer field after early-afternoon showers. As the evening cooled, some people paid $42 to buy black-and-red sweatshirts bearing the concert logo. Most people wore waterproof jackets or carried umbrellas; nearly everyone seemed to be eating.

The concert, which is billed as the largest and most ambitious political-awareness rock tour ever attempted, will visit at least 16 cities in 13 countries and play to more than one million people. Human Rights Now, as the tour is known, is intended to raise awareness rather than funds, as it celebrates the 40th anniversary of the Universal Declaration of Human Rights, a manifesto adopted by the United Nations.

On the stage at Wembley, which was framed in a blue-and-green map of the world, was a huge banner marking the declaration's anniversary, and members of the audience were given pocket-sized copies of the 30-article manifesto. Late in the program, a new 20-minute animated film was shown that illustrated the declaration with specially commissioned images by 31 international animators. The voices were those of Jeff Bridges and Debra Winger. Occasional Political Songs

But for the most part, the musicians made little direct mention of the evening's human-rights message, choosing instead to sing the occasional political song, such as Peter Gabriel's 'Song for Steven Biko', a remembrance of the black South African activist who died in police detention in 1977.

"I think people come out to see the rock show, to dance and have fun," said Mr. Springsteen prior to the concert. "But if you reach a small percent, if you reach just one person, you've done something."

Many in the audience seemed to agree. "You want the truth?" said Kevin Hall, a printer from London with a gold hoop in each ear. "I came for the music, though I believe in the cause."

Nick Varley, a computer programmer who made a 90-minute trip from Bristol for the concert, said: "It's a good cause, but with those performers, I'd have come anyway. It's the concert of the year."

The tour, which may include as many as 21 cities by the time it ends, is the result of 23 months of planning, according to Mary Daly, a tour coordinator. "We sat down the other night and figured out that there were 1,520 visas issued, 1,572 injections given and 2,240 malaria pills taken."

The musicians, organizers and technical crew, who number more than 150, will spend more than 100 hours in the air during the tour, ferried to each destination in two chartered DC-10 planes.

In addition to the concerts, a variety of other activities will be held in most tour cities to publicize the human-rights declaration.

Before today's concert, Pat Riley, coach of the Los Angeles Lakers, held a basketball clinic at Wembley for British players and coaches. "If there's one thing that basketball expresses, it's freedom and the freedom to play, which a lot of us take for granted," he said.

But the message for the most part will come from the music, the organizers said. "It's important to remember that music is a very important political tool," Sting said before the concert. "In a sense we're just coming into the realization that we can influence people by what we sing."

(c) New York Times by Terry Trucco
Comments
0
You must be a logged-in member to add comments. Log In | Subscribe 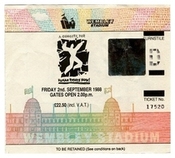