Dashing in and out of limousines, scarves covering their faces. Backstage at the Boston Garden, waiting to go on, surrounded by security guards. Sting, dancing, dressed in commando chic, Andy Summers and Stuart Copeland in sweatsuit and running shorts.

''Ladies and gentlemen, the Police,'' and the crowd explodes as they run up onto the stage, the spotlight wandering to find its target. ''Just a castaway... an island lost at sea'' - Sting singing 'Message in the Bottle'. Copeland and Summers playing their unmistakable blend of pop and reggae.

The first night of their latest tour of the Americas (it will take them through the U.S. and South America) went rather well for ''The Band That Got Everything Right,'' a label Musician tagged them with in a recent article.

And they do seem to get everything right. The Police are three talented and photogenic blondes (albeit dyed) who write songs that are so contagious they invade your unconscious: 'De Do Do Do, De Da Da Da' singsongs in your head whether you want it to or not.

They sounded excellent except for some minor volume problems. After coming out and assaulting the audience with their top of the pops hits, they settled into a long and fascinating set. 'Invisible Sun', 'Walking on the Moon', 'Spirits in the Material World', 'Bring on the Night' and their encore, 'So Lonely' were highlights.

The Police were complemented by a horn section that filled their music out nicely. Gone are the days of endless jamming because of lack of material. In its place are lengthened compositions, Sting's remarkable voice, and soaring instrumentals.

They ran off stage, were wrapped in biankets held by their security crew, into the limousines, and off to three hundred dollar a night hotel suites. And the story goes that four years ago when they came to Boston to play at the Rat they slept in their van. ''The Band That Got Everything Right, ''right? And they're doing it all again, at the Boston Garden, April 12.

Go-Gos and Police dazzle the crowd at Boston Garden...

This was no ordinary night - certainly not your annual, been-done-before show with Styx, Jethro Tull or Ted Nugent. Rather, it was the first time two of new wave rock's most successful bands - the Police and the Go-Go's - were playing the biggest hall in town. Riding the crest of almost maniacal popularity, both bands handled the situation beautifully.

Instead of being engulfed by the cavernous Garden, they lent a personal touch to the otherwise drab old hall. Each group clearly would have been more comfortable in a dance club - and it was only a few years ago each had performed in Kenmore Square's tiny Rat - but they didn't let that bother them. They had the 15,500 sell-out crowd up and moving from the start, conveying a freshness absent from many of the bloated, mainstream Garden rock shows.

The Police, who have blown hot and cold in the past (and been labelled the new wave's Grateful Dead because of it), pulled together for their best concert yet in Boston. Self-assured and poised, they avoided the tedious ruts that have plagued them previously - the pointless jamming and overwrought stretching of songs. They stayed tight throughout, keeping a hard edge on their reggae rhythms and complete control of the tension-and-release factor. Some of their arena stunts were unimaginative - such as turning the house lights on repeatedly and resorting to a mirror ball that threw out streams of light - but their music didn't falter.

Vocalist Sting, who was rumoured to be ill but was, like the rest of the band, only suffering from jet-lag (having just arrived from Europe), was immense. Like an international shaman, he led the crowd in the simple, innocent chants that have become the Police's trademark, such as ''when the world is coming down, you make the best of what's still around,'' and ''one world is enough for all of us.'' It's as basic a philosophy as you can get, but took on a joyous communal spirit when many fans sang along last night.

Keeping chatter to a minimum (one of the only between-song raps was Sting turning to the rear balconies and saying, ''I hope you like our arses''), the Police took over immediately with their hits, 'Message in a Bottle' and 'Everything She Does is Magic'. Surprisingly, except for the liquid psychedelic noodling on 'Shadows in the Rain', they rarely let up the pace. Drummer Stewart Copeland keyed peak after peak - as on his torrid crescendo during 'Bring on the Night' - and guitarist Andy Summers did likewise.

Summers reached an unprecedented (for him) metallic level on 'Demolition Man', adding another notch to his fabled sonic legerdemain. Keeping the Police on track was a three-man New York horn section, which added new zest to some of the arrangements, and helped make the evening live up to its frenzied advance billing.

As for the Go-Go's, whose innocence is right out of Archies Comics, they warmed up the crowd with a tantalising set of razzle-dazzle, '60s-minded pop and surf rock. They had just the right touch of sloppiness to make it all believable, and yet had an underlying tautness that never wavered. Dressed mostly in tattered clothes that looked like Halloween throwaways, they added to the exhilarating mystique of this special Garden night.

(c) The Boston Globe by Steve Morse
Comments
0
You must be a logged-in member to add comments. Log In | Subscribe 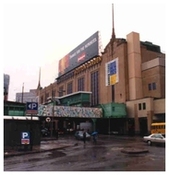