Sep
1
1982
Seattle, WA, US
Seattle Center Coliseumwith Huey Lewis & The News
Share
The Police do an arresting concert for a grateful crowd...

A Seattle new music fan once told me he liked his music to be like his teeth: ''Tight when I bite.'' I hope he was at the Coliseum last night to hear the Police and Huey Lewis and the News. Both groups played as tightly as possible, bunkering down on the melodies without letting up on the beat.

The crowd that packed into the Coliseum was clearly a Police crowd, displaying a taste I can't say I entirely shared before the trio lit up into their set. For me, listening to this group's albums can be a stiff sentence.

A few great tunes stand out, such as 'Don't Stand So Close To Me' and 'Spirits In The Material World', but the majority of their material tends to run together, clean melodies blended with reggae's slightly bent rhythms heated up to on a rock'n'roll burner. Granted, The Police are superb musicians, and lead singer Sting has the purest tenor voice to come out of England since Paul McCartney.

On their albums, however, they sound encased in their own proficiency, as if skill were for them a barrier to felling.

No such problems afflicted their live performance last night. They played all out, with flair and emotional resonance. I think the crowd brought out the best in the group. The fans present made a living wave of grateful reaction that immediately washed back up on the stage, bathing the performers in its genial grace.

Because the group tended to play their songs in tight succession, they squeezed a lot into this one set, including 'Spirits In The Material World', 'Message In A Bottle', 'Every Little Things She Does Is Magic', 'Walking On The Moon', 'Roxanne', and 'Demolition Man'.

The light show during The Police set was the best I can remember seeing at a rock show. It wasn't flashy, but it made light a palpable presence, another chord in the music.

San Francisco's Huey Lewis and the News had to work harder to win the crowd, but win them they did. Lewis and his group have their musical feet planted firmly in rhythm and blues. Lewis's gravelly but sweet voice is perfect for the blues-style growls and warbles.

The group favoured material from their recent album, 'Picture This'. Particularly good was their live version of 'Working for a Living' from that album. They slowed it down and made it more raucous. Another highlight was Lewis on mouth harp with John Colla on sax, in a blues duet.

Both Lewis and The Police can be vacuous in their material, but last night both groups played so well it was hard to fault them for occasionally weak material.

The Police will never top their unforgettable performance at the Showbox two years ago, but last night's Coliseum concert came close. The Showbox show was special mainly because it was small. The audience could get close to the band and vice versa, which made us all seem one. Eventually everyone was bouncing in unison, turning the floor into a trampoline. We almost literally tore the house down.Last night the Police tried to create the same kind of intimacy by getting the near capacity audience involved as much as possible.

Sting, the lead singer and bassist, called for crowd response almost from the moment the band stepped on stage. And he got it, whether asking for a sing-along or a yell of approval. That unified the audience and helped make the concert less impersonal than most Coliseum rock shows. The audience responded readily because the Police deserved it. Away from touring for a long time while Sting made movies and the other two members did solo projects, the band was refreshed, tight and determined to please.

The sound system, suspended above the stage, helped considerably. Big and powerful, it turned some of Sting's bass solos into tangible sonic waves that vibrated listeners' bodies. It made Andy Summers' guitar solos crisp and shimmering and Stewart Copeland's masterly blend of rock and reggae drumming come through loud and clear.

Already influenced by reggae and rhythm-and-blues, the British group's music was funkier than ever before because of a soulful three piece horn section that backed it on many tunes.

All the songs in the 90 minute set came from the band's albums but most were reworked, some rhythmically, others instrumentally. The crowd loved all of them.

Having Huey Lewis and the News open the show was a brilliant stroke. Its music is all over the radio and on Music Television, so the band didn't have to prove itself - the audience already was on its side.

Its classy blend of traditional instrumentation - sax, harmonica and keyboards as well as the usual guitar, bass and drums - and earthy lyrics was a big hit with the crowd.

(c) The Seattle Times by Patrick MacDonald
Comments
0
You must be a logged-in member to add comments. Log In | Subscribe 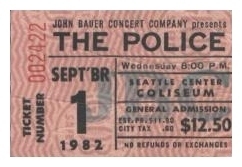