The most inappropriate set of the day introduced the world to what might just be a great rock band, Strontium 90. Stewart Copeland, ex-Curved Air, still of Police, checked out the crowd and remarked in amiable mockery, ''hey, its the real brown rice scene man, far out''. Tim Blake, who is quite partial to brown rice I imagine, introduced Strontium 90 to a friend this way: C'est le rock'n'roll Anglais tres fort, Mais on n'est pas ici pou critiquer'' - just as well.

Mike Howlett is Strontium's Gong connection and he has obviously decided on the direct approach this time round. Like grab them by the hair, ears, throat and goolies all at once. Even some committed Teapot freaks were shaking their heads. The WOW is the dynamic double (no hyphen) bass from Mike and Sting (vibrant singer and writer also moonlighting from Police, ex-Last Exit). An idea I've been craving to see tried out and it works like manpowered earthquake. In horse racing terms I feel like the trainer who discovered Red Rum. It's only rock and roll, its just another nag, but then again sometimes you find a thoroughbred. Mike Howlett said cockily to the delighted/puzzled crowd: ''C'est autre chose huh? Ca bouge.''

This was the line-up for that day: Mike Howlett bass, vocals Sting bass, vocals Stewart drums Andy Summers guitar. The next day in Colmar (also in France) they did the same set again. A few months later Sting and Mike Howlett made a single together as ''The Radio Actors''. The release was called 'Nuclear Waste' written by Harry Williamson and on the b-side 'Evensong'.

Sting from ''Broken Music'': ''There are great plans afoot for a Gong festival in Paris at the end of May. As the group had enjoyed cult status in France, someone had suggested a massing of the clans wherein the various offshoots of the original band would play at the Hippodrome, a permanent circus in the north of Paris. Strontium 90 are, of course, invited to play and we all are energized by the idea. The band will be fairly low on the bill, but we are used to that, and the event will dovetail handily with a festival in Colmar the next day that the Police have been booked for, supporting Dr. Feelgood. The concert starts at three in the afternoon and doesn't finish until three the next morning, with over five thousand French hippies in attendance. A giant weather balloon is suspended from the big top, and a piddling laser affair makes sporadic and halfhearted attempts at creating a science-fiction ambience. Here too are the more traditional fire-eaters, trapeze artists, and sad peripatetic clowns, who give the event more of the atmosphere of a shabby medieval fair than a convincing glimpse of the future. And then there are the bands. Splinter groups of splinter groups all loosely related to the vast amoebalike Gong phenomena, a band famous for its theatrical indulgence and hobbitlike eccentricities. We play well and the audience applauds earnestly. The ubiquitous Phil Sutcliffe, who seems to be following me round like the recording angel, is covering the event for Sounds. He seems mightily impressed by the band and, in a turnaround from his response to the Police show in Newcastle, gushes enthusiastically. We stay to watch Steve Hillage, who is terrific - probably the nearest the British rock scene ever got to producing a Jerry Garcia - after which Andy, Stewart, and I escape before the grand finale. Mike, of course, is forced to stay behind.'' 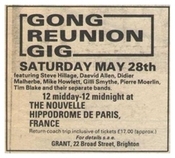