Aug
5
1977
Mont De Marsan, FR
Festival
Share
Sting from ''Broken Music'': ''Andy is now officially a member of the Police, as yet a quartet, when we are booked to play the Mont de Marsan Festival in southern France with the Clash, the Damned, and the Jam. We are pretty low on the bill, but the exposure, according Miles, will be good for us. Although not entirely committed to his brother's band, Miles is taking more of an interest in us. We work hard, we don't complain, and we are flexible enough to fit in with his plans when other bands let him down. But he is still not our manager. It takes us two exhausting days to drive there in a big yellow bus, no doubt testing Andy's resolve to slum it and be a foot soldier in this new invasion of the Continent. He proves himself to be more than equal to the task and makes an entertaining traveling companion. We arrive at the town's bullring, road-weary and starving, but we play pretty well and go down a storm. Andy is definitely an asset, although there is some friction between him and Stewart, who maintains a need to prove to the rest of the world that he's the fastest and most frenetic drummer on the bill, if not the planet. The high spot of the evening are the Clash, who I love because they seem genuinely musical, employing simple chords and melodies played with clarity and economy. Captain Sensible of the Damned walks on in the middle of their set, drunk, uninvited, and wearing a bright-red beret. He drops a stink bomb behind Joe Strummer, who manfully continues singing, and then falls off the stage, painfully astride a scaffolding pole. He is hurriedly taken out of the bullring on a stretcher, singing 'The Marseillaise'...''

Andy Summers from ''One Train Later'': ''Our second gig is in a bullring at the Mont-de-Marsan Punk Festival in France on August 5, 1977. We travel all the way to the South of France in a clapped-out old banger of a bus with Eddie and the Hot Rods, the Clash, the Damned, the Jam, and the Maniacs. Low on the bill, we are up against bands that are already famous and have a strong following; but we go on, determined to compete. Even though it feels clumsy with two guitars, we pull off a short but intense set and acquit ourselves. After the show Sting, Stewart, and I go into the town and find a cheap café, and when I make some acid remarks about the waiter serving us, Stewart laughingly remarks, ''Oh, so it's going to be that sort of a band is it?'' It seems like a nod toward acceptance and I feel the possibility of fraternity.''

''...The Police, making their first appearance with veteran guitarist Andy Summers (an incongruous recruit to the new wave), suceed this debacle. They perform competently, and Summers delivers some demon guitar breaks, but the music as yet lacks any real identity. And the sight of Summers pogoing and goinf down on the bass guitarist is more than a little disconcerting...'' 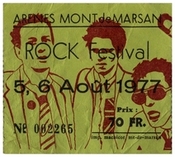