Sting from 'Broken Music': ''The tour begins at Essex University, followed by a sold-out show at the Rainbow in Finsbury Park. Spirit, the seminal West Coast psychedelic band from the sixties, are still playing the same brand of woozy, trippy rock and roll that made them famous. The Police and Mark P.'s ATV are booked as support, Spirit being Mark's favorite band and the tour being partly his idea. We are still bottom of the bill. Despite the promising reaction to 'Roxanne' at the record company, we are still regarded as poor relations at Dryden Chambers, but we don't mind. Mark's band has improved a great deal since the last time we saw them, but we don't imagine we'll have much trouble blowing them off the bandstand. And I've forgiven them for demolishing my car, aided by Miles footing the bill for repairs to the front end.

The audiences that turn up every night are almost exclusively made up of people who look as if they've stepped out of some kind of decade-long time warp, with shoulder-length hair, beads and bell bottoms, sandals and dirty toenails. I don't get the impression that they've dressed up in honor of Randy and the trio - this is how they always look. I hadn't realized that there were so many hippies left. As we are a band called the Police, with cropped platinum hair and tight trousers, the audience is initially and quite understandably hostile to our collective gestalt, but by the first number our raucous little combo has managed to win them over, and if my arrogant stage persona comes off as alienating, then it is backed up by the inarguable fact that we can play. We are fearless, unapologetic, and cocksure of ourselves, and are rewarded with a rousing ovation at the end of our half-hour spot. Miles hugs me and tells me that I'm going to be a big star. This time I don't recoil.

Mark's band does fine and will glean a polite if sparse response, while Spirit tear the place apart, Randy California giving a more plausible impression of Jimi Hendrix than I would have thought possible. I find his rendition of ''Hey Joe'' very moving and heavily nostalgic, especially since Hendrix had died so tragically almost eight years before.''
Comments
0
You must be a logged-in member to add comments. Log In | Subscribe 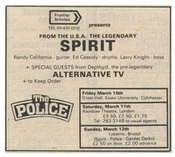