In trash lies vitality. Chute: the late Sixties turned indies into multi-nationals, commercial anarchy into careers, pop into that albatross (shoot it!) called ''rock'', inserting considerations that hitherto had little to do with the roots of realities of youth music: ''taste'', ''musicianship'', and ''progression'' in place of immediacy, rebelliousness, trashiness, social importance (within parameters) and burning songs. And from ''rock'', to AOR/MOR, youth to ''adult'' orientated rock- flick the digitals. Flick them further to a new, parallel event: those very qualities, destructive and enervating, are now being reaffirmed in a way that makes one run to the frank, admitted blatant exploitation of the disco market@ at least, it's honest.

The Cramps, at this point in time -1979, Week 24 - are great for reasserting, however temporarily, the primal two-fingered impulse that turned Fifties rock'n'roll into global youthcult. A good dose of salts rather than ''the future of rock'n'roll''; don't hang them with that albatross.

Things happen so fast as our culture accelerates in neurotic, pummelling intensity: measure a group's life in singles rather than albums - blink and a group goes off fast as overnight milk. In a month, the Cramps might be shitty, in a week they may be the new Gang Of Four - ''saviours'' - either way, it's irrelevant before commerce. And always, there's someone new.

Like the others that congregate that loosest of generations, post-hippie American musicians, the Cramps have carved out their demand for something new through synthesis rather than originality or progression. It's 1979 and everything's been done once already - recycle it! Presented in a new context, it's new.

This approach can illustrate severe long-term problems - consider Devo's situation - but it's fine for the moment. The Cramps explore loser, sinister underbelly archetypes: cartoon strips, horror and pulp movies, obscure rockabilly and Sixties punk. Hardly socially redeeming, and steeped in kitsch (not, necessarily a virtue) but sharpened up to a frenzy with style and panache: a useful injection of energy and rebellion (if only stylistic).

So... the guitarist (female) looks like a girl-gang leader gone very wrong - severe vampire damage - all black and pointy, and the guitarist (male) looks... well... like Haf And Haf of Dick Tracy strip fame crossed with the ''Latex Mutant From Boise Idaho'' - quite disgusting. The drummer makes the archetypal rockabilly bombhead moves - unfocused, black, minimal - and the singer, one Lux Interior, could be rather cute if he didn't squirm so, whip his dick out, and act out a bad trip.

The music is similarly chosen: a mix of trebles - rockabilly tremolo (with short unimaginable static bursts) and punk fuzz - over skeletal drums and spoilt vocals. It sounds dreadful in print, confident in the flesh.

One main danger: their close-ish reworks of rockabilly classics like 'Domino' add little, and point to a stylistic cul-de-sac; originals like 'I See You In My TV Set', 'I Was A Teenage Werewolf' and 'Weekend On Mars' point the way out of it, playing around with archetypes and music.

The Cramps present the nightmares of the Fifties, as today's heroes (think about that), and lost music as stylistic rebellion. It'd be easy to write them off as a kitsch-obsessed writer's wet dream: their ability to be simultaneously menacing, danceable and very funny knock that one on the head.

Thanks to billing mismatch (...expediency) this stuff goes down like a pork chop in a synagogue with the Police audience. Bog rolls and curses are thrown. At the end, a final test of nerve: Lux gets bored and decides to shake things up a bit. He quickly moves to the front of the stage and starts climbing over into the stalls: the guard... well, this isn't the sort of thing... restrains him. Lux pats his shoulder, wonders whether to deck him and brushes past to take his theatre to the goggling audience: the number winds down, he whips around, whips the mike round the bouncers head and shoulders: ''This man wants a word with you.'' While the bouncer fumbles, exeunt Cramps. Passed with flying colours.

The audience shrugs off the Cramps like a bad dream and waits for a proper rock group. They appear: they're called the Police, and almost everyone here likes them - that's why they came.

Premised by one perfect pop single, 'Roxanne', the Police are dead right for all those who thought punk a bit of an aberration but were conditioned by all the fuss and the rhetoric to expect something ''new''.

Excellent musicians all, they fit together like a glove, yet remain rooted in the late Sixties rock ethic: drummer Stewart Copeland played with Curved Air, Andy Summers with Eric Burdon in some incarnation or other.

No put-down - the Police haven't got their motives confused and have written one song I like a lot - but an explanation: their popularity rests as much on a clever grafting of these traditional elements with those that are new in context - short dyed hair, Jam-ish leaps, vaguely offbeat lyrics, reggae embellishments and structures - as on their hard work and craft. Compounding the roots, singer Sting takes the leading role in the Who film Quadrophenia; hence the leaps (Jam - mods) and his sure success.

It's dull, professional stuff. Sting takes the frontman's chores with an easy yet ultimately reserved matiness, while the others remain anonymous, preoccupied with technique. The main eruption of this particular sore manifests itself in Andy Summers' quick yet empty guitar solos - never found them interesting in the first place, let alone re-presented.

Live, they have no trouble filling the hall, nerves showing instead in the anonymity and samey sound (whereas the Cramps didn't care): almost every song was teased, taken down and built to a climax while occasionally Sting would rouse the audience to clap. They did, exuberantly. I yawned, tapped my feet in respect to the beat, scratched by head and walked the theatre, waiting for a surprise.

They encored, few people danced through rigorous policing: they do what they do well. Can I (ahem) go now?

Quick moral: youth music should never be afraid of dropping its aitches.

(c) Melody Maker by Jon Savage
Comments
0
You must be a logged-in member to add comments. Log In | Subscribe 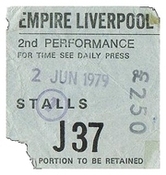