In Albacete on Friday, Sting began his Broken Music tour in Spain and he did it before 12,000 people jammed into the stadium at Carlos Belmonte. The 12,000 ''albaceteños'' attended a a great, magical concert at the Carlos Belmonte stadium and on Saturday, 1 July the magnificent British musician and composer will fill the nature park at the Gredos mountain range in Avila

In addition to performing songs from his solo career, Sting also revisited some of his best known Police songs, exciting everyone with his music. It was a concert that many people will remember for its emotion and intensity. Sting took the stage at Carlos Belomonte after 10pm opening his two hour long concert with 'Message In A Bottle'.

Altogether, Sting performed twenty songs in a very interesting performance, including some of his most successful songs like 'Englishman in New York', the Police's great 'Roxanne'. 'Every Breath You Take' and 'Fields Of Gold' were among the other songs performed during the evening, as well as a daring version of The Beatles' 'A Day In The Life'. 'Fragile' was the final song of a concert that included two encores before Sting finally said goodbye. As well as this concert other big events planned this summer for IV Centenario included a performance by José Carreras on the same day in Cuenca, a concert by Celt on July 21 in Guadalajara, and a concert by Bryan Adams at lcázar de San Juan on July 28.

The veteran British rocker drew more than 12,000 fans in a concert that lasted almost two hours.

After a long catalogue of incidents, date changes, postponements and heaven knows what other problems that had to be overcome to achieve it, Gordon Matthew Sumner - better known across the planet as 'Sting' - performed the first of his two Spanish Broken Music concerts in Albacete. It was an intense but brief concert that flashed by in an hour and three quarters in which the veteran rock idol performed many of his best known songs before more than 12,000 albaceteños who were thrilled with his presence and his voice.

Unlike the spectacular line-ups of previous tours, Sting appeared not just before local fans but from fans from all across Spain, with a simple, spartan show. The only stage effect was the lighting, and the band consisted of Abe Laboriel Jr on drums, Dominic Miller and Lyle Workman on guitars and Sting himself on bass. The simplicity of the line-up was reminiscent of his time with The Police and it led Sting to revisit his extensive reportoire. Precisely because of the simplicity of drums, guitars and voice without embellishment, the most intense moments came with the Police's best known songs such as the aforementioned 'Message In A Bottle', 'Every Breath You Take' and 'Roxanne'. As for the hits from his solo career they shone best when intimate and simple by emphasising the delicate touches of acoustic guitar such as the beginning and end of 'Fragile' - a counterpoint to the vibrant rhythms of some of his earlier songs.

The audience that sat in the bleachers and stood on the plastic covering that protected the pitch at the Carlos Belonte stadium were a mix of everything, from those that must have been in their forties at the end of the 70's when The Police first started throught to adolescents who do not know or do not remember what vinyl is, having been weaned musically on MP3s.

The only complaint which could be directed at Sting during the evening is that after waiting so long for his return to Spain, his long standing fans from his previous tours had only a little under two hours of performance. But for the first timers it was a solid performance.


Sting draws more than 12,000 fans in Albacete to the Carlos Belmonte stadium...

More than 12,000 fans joined British musician Sting in Albacete yesterday for his first Spanish concert of his Broken Music tour. The Carlos Belmonte stadium was the venue where they listened to some of performers best known hits such as 'Englishman In New York' and 'Roxanne' among others.

The concert was part of the cultural programming by the regional Government to celebrate the IV Centenario del Quijote and started at arounf 9.30pm with a performance by Fiction Plane, whose leader, Joe Sumner, is Sting's eldest son.

After 10pm Gordon Matthew Sumner, better known as Sting, appeared on stage and opened the two hour long concert with one of his most well known songs, 'Message In A Bottle'.

Dominic Miller (guitar and vocals), Lyle Workman (guitar and ex-Beck and Frank Black) and Abe Laboriel, Jr (ex-Paul McCartney), accompanied Sting in a continutaion of the tour first started in Europe in 2004-2005 when presenting his book 'Broken Music'. In total, this tour includes 28 countries, where he will perform 34 concerts in less than two months.

In all, twenty songs were performed during the concert that made the audience that sing and dance, songs from his days fronting The Police such as 'Every Breath You Take' to others from his solo career such as 'Fields Of Gold'. Sting also performed The Beatles' 'A Day In The Life'.

'Fragile' was the song that completed the evening, but not before the British singer had returned to the stage twice at the insistence of the audience who did not want to say goodbye without hearing other songs such as 'Next To You'.

As well as this concert, other important events organised by the company Don Quixote 2005 for this summer include a performance by José Carreras in Cuenca on the same night, July 1, a concert of Celtic music on July 21 in Guadalajara with Short Celts, Carlos Núñez, Cristina Pato and Judith, and a concert by Bryan Adams in Alcázar de San Juan (Ciudad Real) on the 28 of July.

Sting celebrated the first of his two Spanish 'Broken Music' concerts yesterday evening in Albacete by opening with the famous 'Message In A Bottle' a song that excited the 12,000 fans gathered inside the Carlos Belmonte stadium.

The grass on the football pitch at the Albacete Balompié was filled with fans who sang along with the British musician and legendary ex-leader of The Police for two hours during a warm summer night.

This was the way the singer's fans from Albacete and from all over Spain, as well as ninety accredited journalists, enjoyed the songs during the concert that included 'Roxanne', 'Every Breath You Take' and 'Message In A Bottle' from his days with The Police. Sting also performed 'A Day In The Life' by The Beatles, his famous 'Englishman In New York', 'Next To You' which had the audience on their feet, 'Fragile', 'Voices', and 'Shape Of My Heart' as well as other hits.

Sting was accompanied on the guitar by Dominic Miller and Lyle Workman, and on the drums by Abe Laboriel Jr. (ex-Paul MaCartney). Also, the group that provided the opening act , Fiction Plane, has Sting's eldest son, Joe Sumner, as its leader.

Sting, born in 1951 in the United Kingdom, was here yesterday evening as part of the one of the performances planned in 2006 for fourth centenary celebrations of Cervante's Don Quixote, organised by la Junta de Comunidades de Castilla La Mancha through the company Don Quixote 2005.

Tonight, Sting will perform another concert at Hoyos del Espino in Avila as part of his European Broken Music tour which coincides with the 30th anniversary of the start of The Police.

(c) El Mundo by Maurilio de Miguel
Comments
0
You must be a logged-in member to add comments. Log In | Subscribe 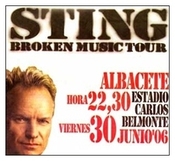