Last night in the Tucson Community Center Arena, the Police proved they could move a capacity audience of 9,500 as easily as they did the University of Arizona's Main Auditorium crowd of 2,600 two years ago.

This British trio has animal magnetism to burn. And it did, for a 90 minute show of bare essentials rock'n'roll that kept fans standing on their chairs and cheering the entire time.

The group's blond bass player, Sting, has become the centre of this adulation. Singing most of the songs, doing all the talking and providing the main point of reference with his strutting about, Sting's personality at times eclipsed that of the others.

For last night's concert he wore a bright yellow foul weather sailing jacket, T-shirt with thin blue and white horizontal stripes and baggy white pants. With his punk haircut and a large circle earring dangling from his right earlobe, he looked perfect for the role of a contemporary pirate.

But musically, the Police are a totally integrated unit. They consistently make the emotional moment greater than its contributing elements.

Drummer Stewart Copeland is credited with originating the winning concept for this trio. He and Sting met by chance in the north of England, played together with another guitarist, and worked briefly as a quartet when guitarist Andy Summers was invited to join. The Police made their formal debut with the present line-up of Sting, Copeland and Summers in August 1977, in Birmingham, England.

They make minimalist music to be sure. Or, stated in automotive terms, the Police are a high performance compact car that gets good mileage. Perfect for the 1980s. Last night we got to sample the deluxe model, which included a three-piece horn section, fog machines and trigger-quick lighting effects, all of which made the songs work even better.

The set opened with 'Message In A Bottle'. Then the horn section were introduced to punch up 'Every Little Things She Does Is Fine'. Then banks of fog came billowing out behind the band and the horn section for 'Walking On The Moon'. By the time these guys got to their fourth song, 'Spirits In The Material World' the crowd knew it was going to get it's money's worth.

The momentum continued building straight through the power punk, punk pop, reggae rock and several flavours of blues the group did as it brought out songs from its current album and a few older tunes, such as 'De Do Do Do, De Da Da Da'.

The set culminated with 'Invisible Sun' - which had Sting tripling on keyboards, bass and vocals - followed by a very strong reggae attack on 'Roxanne'. Next up, as an encore was 'Don't Stand So Close To Me.'

(c) The Tucson Citizen by Chuck Graham
Comments
0
You must be a logged-in member to add comments. Log In | Subscribe 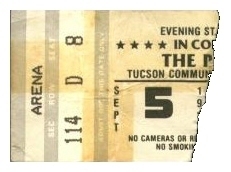