The Police began by announcing that the gig was solely for the fans, with no nasty press present. This desire for intimacy was a bit hard to take, given the band's mushrooming success. In 1979, ''street credibility'' is merely a form of snobbery.

The Police's playing skill is undoubted. Their main dynamic entails a movement from white reggae into fast but elegant punk. But after a time this feature grows tiresome, as does bassist Sting's voice which at first seems refreshingly angelic, then just plain gimmicky and antiseptic. The bluesy 'So Lonely', for instance, demanded dirtier vocals.

But the band are, after all, on a clean up campaign, In a fashion both mawkish and macho, 'Roxanne' damns prostitution. Police lyrics are more New Conservative than New Wave, a fact which isn't noticeable with the band's deployment of reggae seductively pulling at your sense of time.

The band's two encores repeated songs from the set. Are they that low on material? Anyway, the audience, with a fair smattering of old wavers, got what they wanted, even if I didn't. One disgruntled reviewer won't bother with the Police: they're flying high in the US charts. The new Wave has hacthed its Eagles.

(c) Melody Maker by Paul Tickell
Comments
0
You must be a logged-in member to add comments. Log In | Subscribe 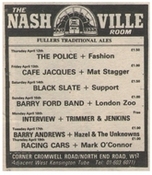