It was a big family and friends night for Sting and the musicians tonight several of whom are from Newcastle so the fan club seats tonight were not as close as the first night but we hope that didn't detract too much from the whole event for everyone.

I was in Durham too and it's difficult to add something at all that has been said so well yet, especially with my bad english.
But I want to thank Tina, Dave and Wendy for the magical two days they allowed us to spend. It's true everything was perfect : the impressive Cathedral, the stunning lighting, the beautiful songs, the musicians, backsingers and choristers, and, above all, Sting, great voice and so kind when we met him at the rehearsals and the aftershow party on Friday. I feeled really privileged to be there and was pleased to chat with fan club members I know yet and other ones. It was also nice to speak with James  Berryman who wrote a funny book "A Sting in the Tale" about his youth with Sting. I want also to thank again Fifi and Ramenes who gave me the possibility to be at the Friday night. When coming back to Paris on Saturday, I met Vincent Segal, french cellist, and we chatted a lot : He said the musicians, including Sting, have made a jam-session at their hotel (Radisson) on Friday night, playing jazz and soul music, celtic songs, Sting's songs and there was a song by Dominic Miller's daughter Misty. Has anybody attended this jam? It would be nice to get more details. Thanks again Sting.com and  Cheers !

First of all, thanks to Sting to give such an opportunity to the fan club. And also to our 'magical trio' Tina, Wendy & Dave - thanks again for organising everything perfectly for these two events.

On Thursday I travelled by plane from Bremen to London-Stansted and from there by train to Durham: what a nice view of the cathedral & castle as you leave the railway station! This was my first time in the Northeast and this alone was worth the visit. I had booked a place at Durham castle (approx. 100 metres istance to the cathedral) so I really felt like a king for 2 nights, the breakfast was worth this decision alone! Several times I imagined myself co-starring in a Harry Potter movie!!

For the first concert I got a ticket for row 19. Just before the show started I got offered a 'filler' place in the 4th row - lucky me. I especially liked "Ghost story", still a great song. And obviously "Soul cake" will be used to promote the album, good stuff. "Gabriel's message" was also fine, I found only 2 or 3 songs a bit boring. After having some drinks in the bar at the castle with the 'Italian team' and the 'usual suspects' (C. + S.) I went to bed with a big grin on my face.

But the best was still to come...Friday was probably the day on which I was to see Sting many, many times:

In the morning Trudie & Sting went for a walk coming from the Cathedral. As T & S went along I just nodded and said Hi to them, I didn't want to disturb them during their private activities. They looked like a couple freshly fallen in love, her hand deep inside his back pocket. In a distance of about 50 metres I followed them as they entered the city center (pedestrian zone) and then along the river to their hotel (SAS Radisson).

In the afternoon I went to the Cathedral to witness the soundcheck/rehearsal. The cathedral was free for everybody as there were still visitor groups guided around. I think it lasted for an hour or so - it's always interesting to this kind of thing.

The ticket for the 2nd concert was at first not that good (row 26) with a rather tall man in front of me (hey, was that you, Sean Potter??) but as I had made contact to the German lightning crew the evening before I managed to get a seat in row 19 and was able to study all the different camera angles on a few LCD monitors as well.

The 2nd concert was a bit longer as they had to do quite a few numbers again. And then the highlight came...I managed to get to the aftershow party. At first outside the room that was used as a restaurant during the day. At least you could see all the people through the windows, have some food and drinks. After 15 minutes or so we entered the room as the security guys gave up looking for invitations, passes or wristbands. Inside I saw Sting, Trudie, Joe, Sting's brother Phil, Dominic, Rhani and all the other musicians. Finally I got 'my' picture of Sting & me - now I have all 3 Policemen complete!!

A great experience which will be among my top experiences as a Sting fan for sure!! 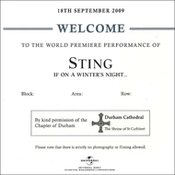