Leave it to Lady Gaga to co-opt a music festival featuring tons of other artists and make it her own.

The Queen of Pop appeared on stage as the final performer last night at the iHeartRadio Music Festival at the MGM Grand Garden Arena in Las Vegas and stayed on stage for well over an hour - much longer than any of the other acts. ''They told me I was only allowed to play for 45 minutes,'' she told the crowd. ''But I think you’re all pretty drunk so you probably don’t know what time it is, do you?''

And it’s true: No one was complaining that she was on stage for so long, serving up hit after hit, including ''Judas,'' ''You and I,'' ''Just Dance,'' and ''Bad Romance,'' which basically blew the roof off the arena.

One of the most heartfelt moments of the evening came when Gaga performed her single ''Hair,'' which she dedicated to a special fan of hers, 14-year-old Jamey Rodemeyer, who committed suicide last weekend after being bullied. During the dedication, Gaga said: ''Jamey I know you’re up there looking at us, you’re not a victim, you’re a lesson to all of us, I know it’s a bit of a downer, but sometimes the right thing’s more important than the music, let’s do this one for Jamey.'' His picture stayed on one of the huge jumbotron screens throughout much of the tune. The tribute was emotional for lots of the crowd - I spotted several concert-goers crying. And, of course, Gaga didn’t let her performance of ''Hair'' go by without inserting some ad-libs: ''Bullying is for losers!'' she cried during the song, which ended with a rain of blue and silver balloons from the ceiling. As gimmicky as something like this could come off as being, Gaga pulled it off very gracefully.

Another of the buzziest moments of the night, too, came via Gaga, when she pulled Sting on stage to perform with her. During her first encore, Gaga sang ''Alejandro,'' ''Telephone,'' and ''Papparazzi,'' which eventually spiraled into her heaving bosom covered in blood. Gaga had died of fame! So she asked for ''the police'' - headed by Sting - to bring her back to life. ''Sting is one of the most kind and beautiful people I’ve met,'' Gaga said, as he came out. The pair sang ''Stand By Me'' and ''King of Pain'' before Gaga ended the set and said she was going to follow Sting ''off stage because he’s cute.'' But, naturally, she returned: Her second encore found the crowd melting down over ''Edge of Glory.'' Then she left again. And returned yet again for a third encore of ''Born This Way,'' which she started acapella before moving into the version we all know and love. Oh, and her hair was short by this point, too.

Gaga was pretty much a show within a mega-show, but there were several other performers before her. The evening began with American Idol judge Steven Tyler, who was sporting the most amazing get-up, as usual, that included lady sunglasses, a big, floppy hat, a feather in his hair, bedazzled vest, and bracelets galore. His set was pretty much what you’d expect, launching with Aerosmith’s ''Sweet Emotion,'' which got the (rather aging) crowd ramped up. Then he did his recent solo single, ''Feels So Good,'' which brought both Nicole Scherzinger (singing, sort of) and Randy Jackson (playing guitar) on stage with him. (Scherzinger returned later in the evening to sing bars from ''Club Banger Nation'' and ''Don’t Hold Your Breath.'') I’d never have guessed we’d see such collaboration between the X-Factor and American Idol judges! But the collaborations didn’t stop there: Tyler also brought out the Family Stone (minus Sly) to sing ''Thank You.''

Next up: Nicki Minaj, whose specializes in stage spectacle and didn’t disappoint last night. She was literally wheeled out on a dolly with demented-looking doctor-dancers at her behest. Her show was honestly one of the most lively - she seemed so dedicated to what she was doing on stage, with weird face after weird face of hers projected on the big screen. She opened with ''Fly,'' and then rapped through ''Roman’s Revenge,'' which I was surprised to see much of the (again, rather aging!) crowd get really into. Her quick dip into her rap from the ''‘Till the World Ends'' remix had me thinking that - maybe? - Britney would make a surprise appearance, but alas, no dice there. And it only got better from there. Her final three songs represented the range that Minaj has: First came ''Moment 4 Life,'' followed by summer jam ''Super Bass'' and weird choice (mostly because David Guetta and Flo Rida weren’t on stage with her) ''Where Them Girls At.''

Rascal Flatts followed Minaj and ran through ''Why Wait,'' ''What Hurts the Most,'' ''Fast Cars and Freedom.'' But their best moment was easily when Natasha Bedingfield showed up on stage to sing their latest single, ''Easy.'' Bringing her out was a huge win for the whole set. And finally, they ended with the very crowd-pleasing cover ''Life is a Highway.'' No one doesn’t know that song.

Next came the diva of the night: Jennifer Lopez. And did she ever put on a diva show. The American Idol judge (actually, all three of them - as well as host Ryan Seacrest - were in the building!) emerged singing ''Get Right'' while holding a glittery cane and wearing a fiery red flapper-style dress, that was completely covered in fringe. I mean, hello there, Jenny! And her opening video was by far the most indulgent amongst any of the other artists: A montage featured Lopez’s eyes, Lopez’s legs, Lopez’s various looks throughout the years. The crowd went nuts, and everyone only got more crazy when she did ''Let’s Get Loud'' and body dipped like her life depended on it. Next was a medley of ''Ain’t That Funny,'' ''All I Have,'' and ''I’m Real,'' before she pulled out a crowd pleaser that everyone was waiting for: ''Jenny from the Block,'' which featured a cadre of male backup dancers. And as if she hadn’t already heated up the place enough, Lopez next served up a ridiculous rousing version of  her latest single ''Papi.'' Based on her performance - and the crowd’s reaction to it - you wouldn’t really have known that this song has yet to take off for Lopez. The diva saved the best for last, of course, with a blowout performance of her big hit of the year, ''On the Floor,'' which saw her sit in a throne atop a staircase in a luxurious red robe. The whole thing was deadly in all the right ways. Lopez has been back for a while, but this performance just sealed that for her.

When Sublime with Rome got on stage next, the younger set in the arena seemed to exit for drinks or cigarettes. Not shocking. But the crowd that stayed seemed fully invested in songs like ''Panic,'' ''Wrong Way,'' and ''Take It or Leave It.''It was during the band’s performance of ''What I Got'' that new lead singer Rome Ramirez spoke some words about the band’s late singer Bradley Nowell: ''Rest in Peace Bradley!'' he screamed.

David Guetta came out next, for what was arguably one of the weirdest and best sets of the evening. Because he’s a DJ, Guetta literally stood in a booth high above the stage and just played his hits, which are mostly collaborations with other artists. ''Where Them Girls At'' got another spin, and he played ''Sweat,'' which featured a couple of cool, lit-up, Tron-like dancer-monsters. The problem, really, was that his interlude felt just exactly like what it actually was: a DJ set. There’s really nothing wrong with that, but it was a little bit of a downer to just hear songs that you love after seeing songs that you love. But that’s when he turned it around: Guetta spun through ''Gettin’ Over You,'' ''Little Bad Girl,'' ''When Love Takes Over,'' and ''Titanium,'' but then the notes for his latest single ''Without You'' began and who appeared on stage? Special guest star Usher! His appearance and sweaty, super-dedicated performance was one of the highlights of the evening.

The last act before Gaga took over the show was country superstar Kenny Chesney. I’m not a huge fan of Chesney’s, but I have to say this guy knows how to put on a show. Granted, he’s fun to just look at with that tipped-too-low cowboy hat and too-tight jeans, but his set - which included ''Beer in Mexico,'' ''Summertime,'' ''I Go Back,'' ''Out Last Night,'' ''Young,'' and ''Somewhere With You'' - was truly a twangy good time. I have major respect for Chesney - he’s got real showmanship.

(c) Entertainment Weekly by Tanner Stransky
Comments
2
You must be a logged-in member to add comments. Log In | Subscribe
August 27, 2011 posted by t_treetops
TRE
I would love to go to this...sounds great
August 15, 2011 posted by deniseja
my birthday in september
would be a great place to celebrate my birthday [a few days late, but that's okay 20th] not holding my breath though
Newer comments    1 - 2 of 2    Older comments 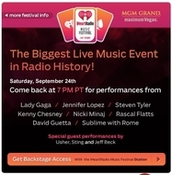