Impeccable. That’s Sting the musician, still. The degree of difficulty in his tunes is high, but the cat never misses a note on his instrument or with his voice, both tones are flawless, and he’s in better shape than most a third his age. It’s enough to make anybody envious, or simply piss you off. It can also be a bit lackluster because there never seems to be any real danger that Sting’s going to slip and fall. He’s almost too good for his own good - so comfortable.

Sting could never be quite so cozy with the Police because he had Stewart Copeland riding up his ass every night pounding his drum kit hard enough to make ears bleed. That’s never the case with Vinnie Colaiuta. His playing was as impeccable as Sting’s at San Francisco's America's Cup Pavilion. His drums were a bit low in the mix, and he served Sting and his songs so well as to practically go unnoticed at times, even as he’s pulling off some of the hairiest arrangements in pop music.

Sting drew from his entire catalogue, happily hopping from Police classics including “Driven to Tears,” “King of Pain,” “De Do Do Do, De Da Da Da,” “Roxanne,” and “Message in a Bottle,” to solo gems such as “Fragile,” “All This Time,” “Englishman in New York,” “If I Ever Lose my Faith,” and “Desert Rose.” Sting alternated between what appeared to be production models of his signature Fender, and the ’53 P-Bass upon which it’s modeled. Sting executed the main “Demolition Man” riff up around the 12th fret on the vintage, but the tone was deep, so an octave pedal was probably in effect. The production model was in play for “I Hung My Head” with its beautifully idiosyncratic 9/8 country feel. Sting proudly announced that Johnny Cash’s cover reached the top of the country charts. “Here’s a song about a little house I have in the country. Well, it’s more of a castle, really, surrounded by barley fields,” Sting announced as he launched into “Fields of Gold.” It was pompous and funny - so very Stingy. He plucked way back by the bridge and employed a brighter, more compressed tone for “Heavy Cloud (No Rain).” He used his thumb and forefinger out of claw-like plucking grip throughout the night. He played a cool little bass lick near the 12th fret in between choruses on a haunting rendition of “The Hounds of Winter” from Mercury Falling.

Since the Police Reunion Tour in 2007, Sting has done a lute tour supporting Songs from the Labyrinth (lute-based interpretation of the music of 16th century composer John Dowland), concerts for his winter album, If on a Winter’s Night…,and an orchestral tour supporting Symphonicities. These days he’s “back to bass” with a seven-piece band that doesn’t rock nearly as hard as the Police or his ’90s rock band, and doesn’t swing nearly as relentlessly as the famous Bring on the Night ensemble featuring Branford Marsalis and Kenny Kirkland. Sting’s current place is somewhere in the middle, and he seems very content there. It will  be interesting to see what his forthcoming release, The Last Ship, will hold. Sting didn’t play any material from the album inspired by his forthcoming play of the same name. The audience at America’s Cup Pavilion was quite happy to hear the hits, and stoked to be on the waterfront in the brand new venue with striking views of the City including Coit Tower and the Transamerica Pyramid. It’s a highly recommended hit for anyone planning to be in the Bay Area this summer. As for Gordon Sumner, he’s still one of the most impressive musicians on the planet in his 61st year walking under its moon.

Comments
5
You must be a logged-in member to add comments. Log In | Subscribe
June 04, 2013 posted by
Cold but great
It was a typical cold and windy SF night, but the band and music was hot! Here is a page with some a bunch of photos from random fans. http://bit.ly/18LRhop 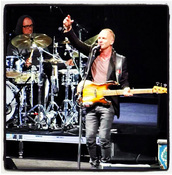 June 03, 2013 posted by Dprovenza
Took The Whole Family!
6 of us braved the cold San Francisco night and enjoyed the show! So great to hear all of our favorite songs re-imagined an and played with such heart! Such an entertaining show! So glad we went!

April 18, 2013 posted by herbalbabe
2 Tickets Needed for 6/2/13!!
If you have two tickets for sale please email me at Brenda.Harris@wjusd.org. Thank you.
February 20, 2013 posted by darkking
We are flying in from TN to see you Stin
We are so looking forward to this concert. Got some excellent front row tickets through the fan club presale, thank you for this wonderful opportunity. We will be flying in from Tennessee just for the concert. I wouldn't miss this chance to see Sting on tour again!
February 02, 2013 posted by msagan
I can't wait!!!
Why isn't it 2/6 yet? I so want tickets for this concert! Symphonicities was fabulous, and I'm dying for another evening with Sting!!!
Newer comments    1 - 5 of 5    Older comments