(c) The Seattle Times by Gene Stout
Comments
2
You must be a logged-in member to add comments. Log In | Subscribe
February 23, 2014 posted by Sharalynne
Rocked Seattle!
It was an AMAZiNg concert! A little far from sold out - I was disappointed in the lack of response from the audience. The musicians, however, were fabulous! Songs with chords that sent chills chasing goose bumps... excellence that brought me to tears. (Shush don't tell anyone that I was really crying instead of the bright lights in my eyes.) I think it was really telling that Sting was off stage during Simon's song set... but he grabbed a guitar and was playing along. We had a perch to see the stage - and a pair of binoculars to watch the musicians play. Everything from the accordion player's fancy foot work to the Washboard strumming/strutting player. Kipper's ability to pick up anything around and make music with it was amazing.... he was at home with either band. Thanks for an awesome concert!
February 20, 2014 posted by pchad383
Sting & Simon Amazing!
Have seen Sting many times before but never like this! Sting seemed humbled by the presence of Paul Simon. It was amazing! Mainly went to see Sting, but Paul Simon's voice and guitar playing were fantastic. It reminded me of Sting's Symphonicity Tour as he "conducted" members of both his and Sting's band as one awesome unit. The only drawback was that alot of the older crowd didn't want to "get up, stand up."
Newer comments    1 - 2 of 2    Older comments 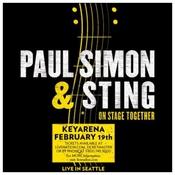