Sting of The Police takes Atlanta back to the glory days of rock ‘n’ roll...

It’s not every day one can witness a legend the caliber of the likes of Sting perform; less so in an intimate setting like Atlanta’s quaint venue The Tabernacle. In support of his twelfth solo studio album 57th & 9th, Sting embarked on a tour of the same name with his son Joe Sumner and San Antonio Tex-Mex/Pop-Rock stand-outs The Last Bandoleros to perform a series of epic concerts that’s left crowds thrilled.

Kicking off the evening, fans were delightfully treated to a rare one-song acoustic performance of Sting’s “Heading South on the Great North Road”, during which the elder Sumner denotes the first time he played in Atlanta, nearly 40 years prior in 1979; which is a telling statement to the longevity and relevance of Sting’s career. Sting then proceeds to introduce his first-born: Joe Sumner, as the first opener.

Joe Sumner, who is a spitting image of his father, charms the crowd with a three-song set that gets the crowd swaying; evidently Joe also inherited his father’s musical talent. But don’t be fooled, Sumner is carving a name out for himself outside his father’s shadow. Prior to performing his set’s finale “Jellybean”, Sumner shares a touching insight into his private life by expressing he sings this track to his daughter when tucking her to sleep.

Up next were The Last Bandoleros, a group of up-and-comers with an infectious sound. This quartet’s been creating a buzz throughout the music industry since dropping their self-titled debut EP and being hand-picked by Sting to accompany him on this tour. The five-song set is a celebratory affair with the crowd at hand on their feet and clapping to the rhythm. The Bandoleros’ unorthodox mix of Tex-Mex and Beatles-like rock is on the high-rise and surely to become a household name sooner than later. Learn more on The Last Bandoleros here.

The moment everyone was waiting for arrives at nine sharp when Sting and the band hit the stage. Opening his Atlanta show with a walk down memory lane, Sting performs hits from his days with The Police. The reminiscent tracks were quickly met with resounding approval from those at hand. A bevy of Sting’s solo hits follow, including new album lead single “I Can’t Stop Thinking About You”. A frenzy erupts when the band delves into mega-hit “Message in a Bottle”; Sting humorously noted that he’d written this track over 40 years ago, when all he had was his inspiration and a fan-base that consisted of just his cat.

The show then gets a little more personal, while paying tribute to the great late David Bowie, Sting summons his son Joe to perform in duet tribute cover track “Ashes to Ashes”, reminding the crowd of Bowie’s otherworldly talents and his impact on music itself. Among other highlights were The Last Bandoleros joining in for a performance of “Desert Rose” and, of course, Sting performing classic hits like “Roxanne”, “So Lonely” and “Every Breath You Take”, with both Joe Sumner and The Bandoleros accompanying.

The crowd is treated to one last grand moment when Sting performs concert finale “The Empty Chair”, echoing his performance from the previous night at the prestigious Oscars. The track, which itself was nominated for an Oscar for Best Original Song, was the perfect send-off to a perfect night at The Tabernacle. At 65, Sting can still deliver a performance that would put peers half his age to shame. Then again, there’s no shame in not measuring up to the likes of a legend like Sting. 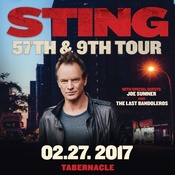