A light rain drizzled but still nearly 9,000 people made their way to Kit Carson Park for the concert event of the summer - Sting.

Downtown Taos roads and sidewalks were jam-packed a couple of hours before the sold-out show at the park, as visitors and locals flooded the venue in anticipation for the event. Patrons from the ultimate Sting fans to the brand-new listeners gathered to hear the Grammy award-winning musician strut his stuff onstage.

The event kicked off with Taos Pueblo's Robert Mirabal playing some tunes before Fantastic Negrito, a fellow Grammy award winner, took the stage. Fantastic Negrito kept up the crowd's energy with his blend of rock and blues before String began a show that had fans singing along to their favorite tunes.

Baby boomers cheered as the beginning notes to "Message in a Bottle" kicked off Sting's set. By then, the sun had dipped beyond the horizon and the stage light show glowed off the faces of the audience.

Sting's presence in Taos brought together generations of music fans and even saw an appearance from Gov. Michelle Lujan Grisham.

Sting's set brought in some of his classics with The Police including "Every Little Thing She Does" and "Roxanne," mixed in with his solo music like "Englishman in New York."

"This one's for Mom and Dad," one audience member screamed as the nostalgia of the 1980s overcame the crowd.

The town of Taos hosted and promoted the sold-out event and members of the community who could not get in were seen dancing on the sidewalks and just outside the gate.

In addition to the music, several food and retail vendors lined the northern areas of the park for people to peruse and ample restrooms were present for this event to overcome a situation at the Meow Wolf Taos Vortex two weeks earlier, for which restrooms had to be closed for a short time.

Audience members were treated to a fireworks finale just as the music ended, signaling an end to the evening.

This event had some changes from previous concerts at the park, including sidewalk railing for Paseo del Pueblo pedestrians.

The town of Taos now looks toward the end-of-the-summer concert series with the Big Barn Dance as the last major music event in the park for the year. The Barn Dance will take place from Thursday-Saturday (Sept. 5-7).

Comments
2
You must be a logged-in member to add comments. Log In | Subscribe
May 01, 2019 posted by fortworthfan
why can i not purcase tickets?
I have signed up as a Sting fan club member....yet I can still not access the pre-sale for Taos....tried and tried to no avail...what am I doing wrong?
May 01, 2019 posted by taosfan
taosfan
I do not see a ticket bar to pre-purchase tickets for the Taos concert on Sept 2nd that are suppose to go on sale in less than 30 minutes. What am I not doing right?
Newer comments    1 - 2 of 2    Older comments 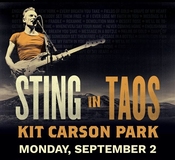