You had to be there, really, but after his first number on stage at the Albert Hall, Sting told a joke!

He'd come on in a buttoned-up frock coat and launched into 'If I Ever Lose My Faith in You', the constant plod of his bass working with the easy lope of the drums. And when it was finished, he caught sight of a small conga of late arrivals, hunched down and sneaking along the main aisle. ''Pah! Critics!'' he said.

OK, it's not exactly Groucho Marx, but this is Sting we're talking about here, a man not renowned for comic turns. There's been much talk of a recent character shift, easing off on the clenched seriousness. There's a fair chance that this is mostly just convenient PR, an easy narrative for the magazines to help give his new album a bit of top-spin.

Sting may jaw on about the rainforests far less frequently these days, but then again, there he is in this month's Esquire, demonstrating for the interviewer the yoga exercise with which he vacuums his bowels. Plus ca change.

Still, there's definitely a light airiness blowing through this current touring show. It sets Sting at the heart of a simple but extraordinary band, his best context (witness the Police); Vinnie Colaiuta plays drums; Dominic Miller is the skinny guitarist, almost completely obscured behind a floppy fringe; and at the keyboards sits the remarkable David Sancious, who seems at times to be playing with five hands.

They were with him last time round, touring to promote 'The Soul Cages' which, caught up with Sting's own writer's block and explicitly about his father's death, was by no means the album of a party animal. Still, even then this band kicked life into songs that lay defiantly flat on the record. Their reward is to return and have a lot more fun messing with the numbers from 'Ten Summoner's Tales', an album that isn't, strictly speaking, ''about'' very much other than Sting's enjoyment in making it.

We're told he knocked the songs together in a fortnight, and it's meant as a compliment that, played loud and clear here, they sound as though they took him a good deal less. Some of the numbers are quick and unfussy in a manner you could reasonably have thought you would never hear from Sting after the Police broke up and he started fooling around with jazz musicians. The album does have its complications - its occasional self involved curlicues, its moments of puzzling 7/4 time. But these seem to have more to do with noodling about for a laugh than with voyaging into the (doubtless fascinating) recesses of Sting's soul.

'Seven Days', played here with additional bounce and snap, is a gorgeous song with a chorus that, unusually in pop, evolves, rather than simply walks a nice phrase round the block a few times. 'The Shape of My Heart', meanwhile, is this album's 'Fragile', sweet and spacey.

The show doffs its cap to the Beatles by taking a brave stab at 'A Day in the Life' and including Penny Lane as a karaoke encore. But there were far more convincing gestures towards a group who were nearly as successful.

''Here's a song by the Police,'' said Sting, and the backdrop lit up, while the band charged noisily into 'Synchronicity', unseating the entire stalls area.We also got a rather woozy and inflated 'Roxanne'.

More reliable by far were the numbers that were austerely clipped - 'Fortress Around Your Heart', say, and the encores, 'Every Breath You Take' and 'Fragile', which brought him ovations. These are never entirely guaranteed in the Albert Hall's muggy hush.

It must be the way Sting tells them.

(c) The Independent by Giles Smith
Comments
0
You must be a logged-in member to add comments. Log In | Subscribe 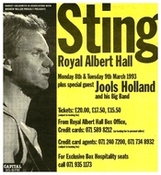