May
3
1993
Seattle, WA, US
Seattle Center Coliseum
Share
Sting's oldies, but goodies, are a hit...

Although it wasn't a sold-out house for Sting last night - perhaps three-quarters full - it belonged to him nonetheless. Over the course of two hours, the singer/songwriter did the better part of his new album, 'Ten Summoner's Tales', and what seemed like the best part of the Police song book. If the audience loved the new stuff, and it certainly seemed to, it went absolutely ballistic for the old tried-and-true.

With the audience screaming before the first note sounded, Sting kicked off his set with the first track and single from the new album, 'If I Ever Lose My Faith In You'.

'Faith' is a strong, melodic, heartfelt song and one the audience was familiar enough with to sing along to. He quickly slipped into 'Heavy Cloud No Rain', using the song to acknowledge Seattle's always delightful weather. Weather and city acknowledged, Sting then did a loopy, loping version of 'Love is Stronger Than Justice'.

Throughout, his band - guitarist Dominic Miller, drummer Vinnie Colaiuta and keyboard player David Sancious - carried the bass man beautifully. Sting has always been a competent player, and his singing was mostly strong and clear. But his band mates truly kept him busy. He had to work to stay on top and in front, but he kept the pace.

Musically, the entire show was one of crisp, well-defined dynamics, strong extended jams and tack-sharp endings.

But as well received as the new material and a respectable version of The Beatles' 'A Day in the Life' was, the reaction paled compared to the near-hysteria that greeted a sudden, grinding, manic version of 'Synchronicity II'. And Sting wasn't just teasing.

He followed 'Synch' with an even more insistent - and more joyous - 'Every Little Thing She Does is Magic' and then tethered that with a back-to-original-form 'Roxanne'. He even bathed the entire audience in red light, just a small part of what proved to be well-designed and dramatic lighting throughout.

'Saint Augustine in Hell' picked things up, but it took the powerful rendition of 'King of Pain' - all done in green lights and smoke - to get the show really pounding again.

But even as strong as the 'Pain' was, the real explosion was 'When the World is Running Down' from the Police's 1980 'Zenyatta Mondatta' album. Somehow this song seems more timely now than ever. And the playing was the best of the night.

Everyone was terrific, but the moment really belonged to David Sancious. His piano work was melodically and rhythmically stunning. His showdown stance with Sting at the end only added to the drama and the pleasure of the moment. And yes, Sting encored with 'Every Breath You Take'.

dada, from Los Angeles, was Sting's opening act. They were a surprise and a delight to an audience largely unfamiliar with their work. The song writing was first rate, as was the playing and performance of guitarist Michael Gurly, bassist Joie Calio and drummer Phil Leavitt.

The band did its breakthrough hit, 'Dizz Knee Land', but equally strong was 'Timothy' and the nicely harmonized and ultimately kicked-out 'Here Today, Gone Tomorrow'.


A good time was had by all at the Sting concert - especially Sting...

The pop-rock superstar known for his brooding seriousness and penchant for social concerns was playful and witty last night at the Seattle Center Coliseum.

Sting appeared to be having a great time, and he conveyed that joy and excitement to the near-capacity crowd that had come to see him. This was a concert to turn a non-fan into a fan - a thoroughly entertaining show.

Sting began with the gorgeous 'If Ever I Lose My Faith in You', the most successful of the songs from his current album, 'Ten Summoner's Tales', whose title alludes to Chaucer's 'Canterbury Tales' as well as to Sting's real name, Gordon Sumner.

The concert heavily favoured the new album, which Sting describes as a true pop album. It is a lot more entertaining and light-hearted than his 1991 album, 'The Soul Cages', the singer-songwriter's dark, analytical and often confessional masterpiece. The sombre but tuneful 'Heavy Cloud No Rain', which could have been an ode to last night's weather, prompted the evening's first audience singalong.

Sting, on bass, grinned happily and danced around the stage during a rocking 'Love Is Stronger Than Justice (The Munificent Seven)', a song about seven brothers who compete for one bride. Sporting short-cropped hair, Sting was dressed in a black velour coat, ruffled white shirt and tight-fitting black pants. When he removed the coat, the crowd cheered. ''Oh, don't encourage me,'' he joked.

The band, which performed in front of backlit fabric panels that resembled the opulent curtains of an old movie house, included long-time backup musicians David Sancious on keyboards, Vinnie Colaiuta on drums and Dominic Miller on guitars. The backing trio provided great musicianship and an energetic blend of sounds, among them folk-jazz, jazz-funk, and pop and rock. Songs occasionally became mini-jams, with Sancious taking the spotlight.

In a crowd-pleasing move, Sting reached back into his Police repertoire for such songs as 'Every Little Thing She Does Is Magic' and 'Roxanne', the group's first American hit. (Sting recalled that the group's first Seattle show was at the Showbox, now the Seattle Improv comedy club.)

Sting later veered back to his newer songs, including 'Saint Augustine in Hell', a black-humoured tune that featured a backdrop depicting a hell in which pitchfork-wielding skeletons rode steeds resembling giant insects. The show was part of Sting's six-month tour, the latest solo trek for the former singer-bassist for The Police.

California power-pop trio dada opened the show with a tight, spirited set that featured songs such as 'Dorina' and 'Dizz Knee Land' from the group's new album, 'Puzzle'.

(c) Seattle Post-Intelligencer by Gene Stout
Comments
0
You must be a logged-in member to add comments. Log In | Subscribe 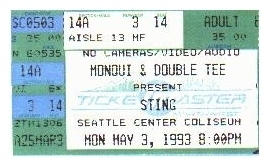