Sting delights fans with flawless, though rather damp, show...

It was a dark and stormy night...

Then again, nights usually are dark, and stormy weather at Red Rocks Amphitheatre isn't unusual in May. The rain that soaked the outdoor venue didn't faze the audience that showed up Wednesday to see and hear Sting put his new album to the test.

The concert was the first of two Red Rocks shows for the former Police man. It was also opening night of the 1993 Summer of Stars concert series. Sting's well-played, perfectly paced show was a great start to a summer full of promise.

There are so many sides to Sting's music that it's hard to classify him. His reggae-influenced music from his days as vocalist and bassist for the Police is a far cry from his current jazz undercurrents, or his decisive pop hooks, yet he expertly and seamlessly merged all sides in concert. His primal screaming for the Police's 'Roxanne' never sounded out of place among songs like 'If I Ever Lose My Faith in You' or 'Heavy Cloud No Rain', from his latest album, 'Ten Summoner's Tales'.

The past had only a background role in Sting's concert plan, though. Except for a few Police tunes, and some solo material, this concert was a proving ground for his latest work, including such gems as the fiery 'Saint Augustine in Hell', the subtle 'Shape of My Heart' and the straightforward rocker 'Epilogue (Nothing 'Bout Me)'. The audience eagerly accepted every note.

I would've liked to hear some of Sting's better solo work, though. His 'The Soul Cages' album has been regarded by some as a dark journey into introspection, but it would have been great to hear the album's most upbeat offerings, 'All This Time' and 'Jeremiah Blues (Part 1)', or even one of its darker songs, perhaps 'Island of Souls'. The album's title track also would've been a nice inclusion.

He did make up for those omissions with some key songs. Part two of 'Synchronicity', from the like-titled Police album, and his jazzed-up treatment of 'When the World is Running Down, You Make the Best of What's Still Around' were two songs that gave the entire band a chance to gel. The latter was especially generous to Sancious, who stepped up his smoke-filled-jazz-club piano playing.

'King of Pain' and 'Every Breath You Take' were two more great offerings from Sting's Police days. He even included a cover version of the Beatles' 'A Day in the Life', the show's only unexpected twist. The closer, 'Fragile', was perfect for letting the crowd down gently, after stunning them with a nearly perfect performance. Miller took over bass guitar duties for the song to allow Sting to serve up some magical classical acoustic guitar.

Sting also had uncanny luck in having chosen songs for the concert that described the weather. 'Heavy Cloud No Rain' preceded the rains that started midway through the show and never let up, and lyrics from 'King of Pain' and 'Fragile' were just too appropriate. When Sting sang, ''I have stood here before inside the pouring rain'' during 'King of Pain', he wasn't lying.

They were Stinging in the rain for the Wednesday night summer concert opener at Red Rocks.A sellout crowd of 9,000 was on hand for the first of two nights of Sting and the same three-piece backing band that he used on his 'Soul Cages' tour.

The weather co-operated until midway through the set, during a fired-up extended version of 'Roxanne', when the moisture began falling in a light drizzle that increased as the show continued.With his new album, 'Ten Summoner's Tales' (inspired by the 'Canterbury Tales' with the title a play on Sting's legal name, Gordon Sumner), Sting has taken a more carefree lyrical approach.

It's a departure from the self-absorption and social commentary that characterised earlier solo works such as 'Blue Turtles', 'Nothing like the Sun' and 'Soul Cages'. Generally, this was the case Wednesday night.

All but one of the tunes from the new album were showcased, along with six faithfully re-created Police songs in a version of the Beatles 'A Day in the Life', a tune that is becoming hip to cover in concert with previous renditions done by the World Party and Robyn Hitchcock.Sting opened with 'If I Ever Lose My Faith in You', his vocal soaring and rock steady bass work punched high in the mix.

'Heavy Cloud No Rain', unfortunately not prophetic, but a crowd pleaser nonetheless, followed. 'Love is Stronger than Justice', one of the more eccentric and adventurous works from the new album with cartoonish lyrics and a jazz-tinged time shift, upped the energy level a little more before he shifted into neutral for 'Seven Days'.

Pacing was a problem. With the emphasis on long blocks of new material and delivering the Police hits in verse, the night alternately began to drag somewhat only to be revved into overdrive, much like sugar highs and lows. 'Synchronicity II', 'Every Little Thing She Does' (is magic) and 'Roxanne' welded together were good examples of the quick hit power burst.

Keyboardist is David Sancious, who previously worked with the E-Street Band and Peter Gabriel, remains Sting's strongest secret weapon. His embellishment and lively jazz stylings were a delight throughout the evening.

Opening with a powerful pop-rock (and a hint of folk) attack was dada the Los Angeles-based trio, which has had a modest hit with 'Dizz Knee Land', a twisted, darkly humorous take on the ''I'm going to Disneyland'' ad campaign. Guitarist Michael Gurley was magnificent while bassist Joie Calio and drummer Phil Leavett (who doubled on acoustic guitar for one number) provided plenty of fluid rhythm and power. 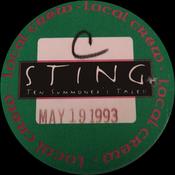