May
24
1993
Houston, TX, US
Woodlands Pavilion
Share
No frills from a lean, spare Sting...

Sting almost pulled it off.

For the second number in his two-hour set at The Woodlands Pavilion, the ex-Policeman called on 'Heavy Cloud No Rain', from his new album.

Instead, Monday night, there was a heavy cloud and a moderate drizzle, sprayed by a breeze that forced soundmen to cover their consoles located under the roof. The rain eventually subsided. But the skies wouldn't part, and this would be no magical evening conducted by a pop shaman.

Instead, it was an appealingly mortal, songworthy concert by a man often portrayed as smug and aloof. Umbrellas popped up among the ever-ready lawn crowd, and Sting responded with a lean backup band, no-frills production and businesslike set that focused on lyrical and melodic content.

New LA trio dada opened with selections from its lilting debut album 'Puzzle', concluding on the record's two best songs, 'Dizz Knee Land' and 'Dorina'. But if they plan on being taken as seriously as their music suggests, bassist Joie Calio had best ditch the shirtless, baggy shorts and flailing-hair routine that every thrashmeister-wannabe garage band affects.

Sting was touring in support of his new 'Ten Summoner's Tales', perhaps the best album of his solo career since leaving The Police. In contrast to the album's slick production and complex instrumentation that features multiple horns and strings, the touring band is a no-nonsense, rock-like machine: Sting on vocals and bass, Dominic Miller (ex-World Party sessionman) on guitar, Vinnie Colaiuta (Frank Zappa, Michael Jackson, Madonna) on drums, and David Sancious (Bruce Springsteen's first three albums) on keyboards.

This distilled Sting 's music from the wayward jazz-rock-worldbeat fusion - often too sophisticated or cumbersome for a pop format - that marked his earlier tours into spacious, agreeable arrangements that allowed his considerable melodies room to breathe. Sting's bass work was elastic enough to rock, stretch out or vibrate with heavy bottom action.

Sancious was especially nimble as the band opened on the album's first cut, 'If I Ever Lose My Faith in You', and proceeded into 'Heavy Cloud No Rain', the gorgeous 'Love Is Stronger Than Justice', 'Seven Days', a literal translation of the Beatles' 'A Day in The Life', 'Fields of Gold' and the lovely 'Shape of My Heart'.

Through it all, Sting , dressed in white blouse and dark pants, distanced his persona from the music, as if his considerable reputation would only get in the way. Enigmatic throughout, his sense of humour and playfulness were kept behind a serious, low-key facade. He resorted to no showmanship and kept his stage patter to a perfunctory, ''It's good to be back in Houston.''

Toward the end of the set, he dipped into the past for 'Every Little Thing She Does Is Magic', 'King of Pain' and the Police classic, 'Roxanne'. Surprisingly, the latter evinced the same energy and passion as Sting's new material, no small feat for a song that is no doubt a trap after thousands of renderings.

The near-sellout crowd called Sting back for two encores.

(c) The Houston Chronicle by Marty Racine
Comments
0
You must be a logged-in member to add comments. Log In | Subscribe 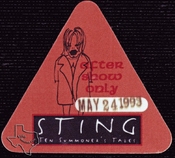