Given the complexity of the man's music, we might have expected a bigger line-up to reproduce it.

But a positively jaunty Sting needed only a guitarist, a keyboard player and a drummer to build on his own solid bass lines as the packed National Tennis Centre absorbed some musical magic.

From the popular opener, 'If I Ever Lose My Faith In You', Sting offered a relentless assault on the senses, rarely leaving more than a second between numbers and occasionally linking them in jazzy segues that suggested hours of rehearsal. He is, it must be acknowledged, a musician's musician.

The latest album, 'Ten Summoner's Tales', was reproduced almost in full, the exception being the lilting 'Everybody Laughed'. Also missing, from previous albums, were 'All This Time' and 'Fortress Around Your Heart', but to quibble about what was not played would be as churlish as gormandising at a banquet, then complaining that there were no after-dinner mints.

Thankfully, Sting paid appropriate respect to his Police past (Every Little Thing She Does', 'Roxanne' and 'King of Pain') without dwelling there. Instead, he used the tidal forces of 'Ten Summoner's Tales' to manipulate a receptive audience. He gyrated across the stage to the funky 'Heavy Cloud, No Rain', then used his plaintive seagull cry to wring the emotion out of 'Shape of My Heart', 'Fields of Gold' and the eerie 'It's Probably Me' (the latter with incongruous audience hand-clapping that Sting may have found disconcerting).

This was a concert full of treasures that reflected Sting's predilection for challenging chord progressions, melodic hooks, powerful crescendos and, amid all that, simple fun (although his witty Easybeats reference after 'Seven Days' drew only a titter from a home-town crowd that should have got the joke).

The big surprise was a dramatic rendition of the Beatles' 'A Day In The Life' but the true highlights were 'Every Breath You Take' and the last of two generous encores - a soothing version of 'Fragile' that left a belatedly warmed-up crowd stamping for more.

(c) Unidentified newspaper by Steve Waldon
Comments
0
You must be a logged-in member to add comments. Log In | Subscribe 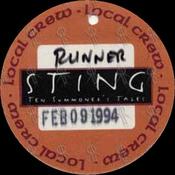