It doesn't seem like a union that would work.

Paul Simon, the introspective singer-songwriter known for pop classics from "The Sound of Silence" to "Graceland," trading harmonies with Sting, MTV-friendly frontman of the Police known for rafter-rattling vocals and jazz-tinged world music.

On Sunday at Amway Center, the duo even looked like an odd couple: The diminutive, balding Simon next to the lanky rock star with the angular features.

Musically, however, the concept was inspired.  For a spirited, skillfully executed 2-1/2 hours, the two men showed the potential of artful sharing, unveiling nuances in familiar hits, nudging material into new directions and mingling resources of two bands loaded with top-notch musicians.

Simon and Sting spent about one-third of show on stage together, including an opening salvo that set the collaborative tone. After a minor delay in the show time (Sting cut himself shaving, he explained), the two men strolled out casually to share vocals on Sting's "Brand New Day," Simon's "The Boy in the Bubble" and another Sting solo hit, "Fields of Gold."

Backed by the combined ensembles, songs often rose above familiar studio versions, such as the fiery interlude in "Boy in the Bubble" powered by Sting's forceful bass. Sting showcased his upper register in Simon's "Bridge Over Troubled Water," while Simon's velvet tenor slipped smoothly into Sting's "Fragile."

The duets bridged mini-sets by Simon and Sting that offered more hits. Sting moved into rock ("Every Little Thing She Does Is Magic," "If I Ever Lose My Faith in You," "Message in a Bottle") and took other stylistic turns.  His horn-fueled attempt at country, "I Hung My Head," sounded more like classic R&B, but was still wonderful.

Simon focused faithfully on his solo career with "50 Ways to Leave Your Lover," "Graceland," "Still Crazy After All These Years" and "Dazzling Blue" (off 2011's "So Beautiful or So What").

Along the way, the similarities became more apparent. Whether it was the Algerian influences in Sting's "Desert Rose" or the Brazilian drums in Simon's "The Obvious Child," the approaches are surprisingly alike.

Even better, they looked like old friends, also the title of a Simon & Garfunkel oldie. While no one can replace Simon's original partner, this promising team shows that a guy can't have too many friends.

(c) Orlando Sentinel by Jim Abbott
Comments
2
You must be a logged-in member to add comments. Log In | Subscribe
March 18, 2014 posted by Gatorgirl
AMAZING!
What an honor to be able to witness Sting & Simon together in Orlando March 16, 2014. I've been a huge fan of both so to see them together was a dream come true! Both men worked so well together. They sang a bit of each others songs and did some duets. The entire concert was just amazing but my favorite moments: Sting & Simon singing The Boxer together, Bridge Over Troubled Water and Every Breath You Take for the finale. To top it off, they ended it with a duet of, When Will I Be Loved by the Everly Brothers. It was just the 2 men on stage with their guitars. Beautiful and absolutely PRICELESS. Could not believe how STING can still hit those high notes, incredible voice and the man is still extremely sexy!
March 17, 2014 posted by surpata
Incredible Finale!
A fantastic show with so many talented musicians from both bands! Sting and Paul Simon seemed to have really found a great groove by this final show. And the handshakes and farewells that all the artists shared on stage when it was over showed that a something profound happened over this 21 city 6 week tour.
Newer comments    1 - 2 of 2    Older comments 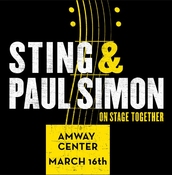