Sting is sailing 'The Last Ship' to Broadway...

The English singer is invigorated by the creative challenge of his first Broadway musical, 'The Last Ship.' He's got an album of some of the songs, and a tour with Paul Simon is planned.

On a recent weekday afternoon, Sting was sitting in a Burbank dressing room, quietly reading on a tablet computer as he waited to make an appearance on "The Tonight Show With Jay Leno."

A chat with Leno wasn't the English singer's only reason for being in L.A.; two nights earlier, he'd entertained a crowd of celebrities and show-biz executives at the Los Angeles County Museum of Art's annual Art + Film Gala. Asked how the gig went, Sting put down the tablet, took off his glasses and reported that no one had asked for his or her money back.

"It's a very well-heeled audience, you know," he continued. "But they like to be told what to do. They feel a bit stuffy in their posh clothes, so you say, 'Look, stand up, and if you wanna dance, just do it.'"

Soon Sting, 62, will put his work in front of other well-heeled audiences.

Next fall, the frontman of the Police, one of rock's most successful bands, is set to hit Broadway with a new musical called "The Last Ship." With songs by Sting and a book co-written by a pair of Tony Award winners in John Logan and Brian Yorkey, the show depicts the decline of the shipbuilding industry in Wallsend, the seaside town near Newcastle, England, where Sting grew up.

It's full of the folk music of northeastern England - not unlike Sting's 1991 solo album "The Soul Cages" - and of the region's factory-working people.

"It's about the place I come from," said Sting, who's also a producer on the project. (He doesn't plan to appear onstage.) "I think these songs have been gestating for a long, long time."

But "The Last Ship" also pulls from a rich theater-music tradition the singer said he "absorbed through osmosis" as a child from cast recordings of Rodgers & Hammerstein musicals. To demonstrate, he picked up a small acoustic guitar in his dressing room and strummed an augmented chord with a kind of unsettled feel.

"You don't often hear that in pop music," he said.

In September, Sting released an album of his own performances of songs from the show, his first record of original material since "Sacred Love" in 2003.

He hadn't been quiet over the intervening decade. There was a set of tunes from the English Renaissance, a jazzy holiday album and a collection of orchestral versions of old hits like "Roxanne" and "Every Little Thing She Does Is Magic." (The Police also toured in 2007 and 2008.)

Yet Sting admitted that those projects had kept him busy during a long stretch of writer's block.

"I'd been wondering whether I'd lost the mojo," he said. "But it turns out I just needed to stop writing about me. Once I said, 'OK, I'm gonna tell somebody else's story,' I freed up and the songs poured out in a very quick way."

A blockage like the one he experienced can be useful to a songwriter, he added: "You need to be on input some of the time, to have something to say before you say it."

Though it fulfills the narrative needs of a Broadway score - something Sting said he had to learn from his co-writers and the show's Tony-winning director, Joe Mantello - "The Last Ship" has dark textures and surprising melodic turns that distinguish it from other current musicals, most of which Sting said he had little interest in.

In the album's title track, he sings of "a strange kind of beauty / It's cold and austere," and that goes some way toward describing these songs. Rob Mathes, who produced the record with Sting, recalled devising a string part for "Practical Arrangement," a stirring plea from one character to another.

"It was very pretty, not cheesy at all," Mathes said of what he'd written, yet three weeks after they'd recorded it, Sting called him.

"He was, like, 'I don't know about the strings - it feels like a carpet on the music,'" the producer said. "He'd decided he wanted brass instead, something less sweet. No one else would have said that."

For all his artistic quirks, though, Sting knows he's a superstar, a guy whose decades of tabloid-scene celebrity - remember the claims about tantric sex? - mean that "The Last Ship" will be under scrutiny from the moment it opens in Chicago in June on its way to New York.

"There is no out-of-town tryout for this," he said, acknowledging that he and his collaborators will be "tinkering" with the show through the final rehearsal, even as Sting hits the road for a five-week North American arena tour with Paul Simon. (That show is to stop Feb. 15 at the refurbished Forum in Inglewood.)

Sting didn't say it, but Simon is one of the many pop stars who've found Broadway to be a tough gig. In 1998, Simon's "The Capeman" famously closed after only 68 performances, costing its investors a reported $11 million.

But Sting said that at this point in his career, he finds the creative challenge invigorating.

"It's tough," he said of the theater. "And it should be tough. But no one's gonna kill me." He laughed. "Let's maybe not quote that." 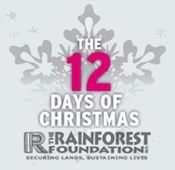 Nov 26, 2013
The 12 Days of Christmas - Rally for the Rainforest at our Online Christmas Auction...
'The 12 Days of Christmas', the RFUK's fabulous and exclusive public auction of gifts donated by celebrities, luxury labels and esteemed Foundation friends, returns for a fourth fantastic year! Open to everyone through an RFUK pop-up shop on eBay, the 12 day auction, running from November 20 to December 1, will offer various gleaming goodies for every savvy shopper ready to raise funds to protect the world's rainforests. The auction can be found at www.ebay.co.uk/12days.
Read more
+

Nov 18, 2013
Launching the careers of two 'Northern Stars'...
Alan Hayward, an archivist at Tyne & Wear Archives & Museums has written an extremely interesting blog relating to Sting that is about the day that he saw the Queen Mother passing by to launch a ship, which he has referred to in a number of recent interviews and during the Last Ship performances at New York's Public Theatre. To read the blog and see some great photographs from the visit and launch of the 'Northern Star' visit http://www.twmuseums.org.uk...
Read more
+