Sting talks to Charlie Rose about his new project... 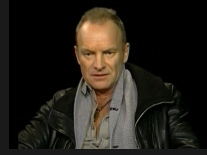 The interview covered various topics but of particular interest for fans was this exchange:

So what are you writing now?

What am I writing? I've embarked on a project that both excites me and terrifies me. I'm trying to write a musical play with a playright called Brian Yorkey who just won the Pulitzer for a play called 'Next To Normal' and it's based upon an album I did many, many years ago about my home town Newcastle in the north of England, the death of my father and the death of the industry which was shipbuilding. And it's a mood piece and I'm trying to make it into a book and a play, and it's terrifying and I wake up in the middle of the night in a cold sweat thinking 'what am I doing, how am I going to do this?' but at the same time I'm very galvanised by it.

The full show is on line at http://www.charlierose.com/view/interview/11340

Dec 11, 2010
Sting in-store signing in Milan - December 18...
On behalf of his album (Symphonicities) and new DVD/CD (Live in Berlin), Sting will sign copies of each release at FNAC on Via Torino in Milan on Saturday, December 18 at 9:30PM. To gain access to this special event, fans must purchase Symphonicities and/or Live in Berlin on December 18.
Read more
+