Feb
17
2014
San Jose, CA, US
SAP Center at San Jose
1
Share
Legends Simon and Sting slay San Jose in concert at SAP Center...
As the lights dropped in the SAP Center, a sudden and powerful applause erupted in the near-maximum capacity building in anticipation of witnessing two rock music legends: Paul Simon and Sting.
"Paul and I share a lot of musical curiosity about a spectrum of music that's pretty wide, and as vehicles for songwriting. So we have lot in common," Sting said in an interview earlier this month with Billboard magazine in regard to touring with his New York neighbor, Paul Simon.
Coming from his early years of British punk, reggae and new wave, one would never think to put Sting and the folk, story telling, sounds of Paul Simon together on tour. But from the moment they hit the stage and shared the first verse of Sting's Grammy award-winning "Brand New Day," it was evident that the two on stage together made sense.
The pair was backed by a heavy-hitting 12-piece band including two drummers, multiple guitarists, backup singers and a firing horn section.
Simon took first leave of the stage as the 12-piece band split and shifted to their appropriate bandleader.
Sting took charge of the crowd, triggering an urge for everyone to stand up and dance to the addicting grooves of classic Police songs such as "Walking On The Moon," as well as his solo tunes.
Captivating the audience with his 1975 classic "50 Ways To Leave Your Lover," 72-year-old Simon soon returned to the stage with his band, looking as if he was right at home.
Though the tempo and mood of the music was much different from Sting's signature sound, the audience was equally entranced by Simon's storytelling ability and the catchy yet smooth pop/folk hooks and chorus lines.
When percussionists started playing the intro to "Graceland," everyone exploded out of their seats to dance and sing along with the New York legend.
The energy of the arena was exceptionally high, and it was apparent that the musicians felt the audience's presence as they played their instruments with passion, perfection and enormous smiles on their faces.
The two bands reunited in their original 12-piece format as Sting took the stage once again with authority and showed his true vocal ability with "Message In A Bottle," "Roxanne" and "Desert Rose."
Music has the ability to become a powerful and uniting instrument for people all over the world, and at no time was this more evident than when two New York apartment neighbors with different musical backgrounds came together and left San Jose's SAP Center in amazement.
The night would end with two influential songs, sang similar to how the concert started as a duet, but ended with the 1970 Simon and Garfunkel timeless piece "Bridge Over Troubled Water." The band left the stage as Sting and Simon paid their respects to a mutual and recently fallen influence, Phil Everly.
The rock royalty duo played an acoustic version of The Everly Brothers' "When Will I Be Loved" that left the crowd with an emotional, influential and satisfied feeling at the end of a magical and rare night in San Jose.
(c) The Daily Spartan by Andrew Forgy

Paul Simon & Sting: On Stage Together...

Aging white boomers were out in force, in pleather pants, for the somewhat odd but overall effective mash-up of "Paul Simon & Sting: On Stage Together," held Feb. 18 at San José's SAP Center, a "reunion tour although we never played together before," as characterized by Sting.

Following the success of other retro pairings such as Elton John and Billy Joel (musicians who actually write thoughtful lyrics, skillfully play instruments and don't need Auto-Tune), this tour showcases the individual and combined strengths of the longtime New York City neighbors. However, their coming-of-musical-age on opposite sides of the pond led each to disparate styles in a time when commercial music actually sounded different.

Sting is aging well. At 62, his long-sleeved, skin-tight black shirt and skinny jeans revealed his still-muscular body and could barely contain his tantric energy as he energetically interacted with the audience while switching electric basses.

A decade older, shorter Simon is a bit paunchy, gray where Sting is sexy bald, but still showed his impressive acoustic chops as he connected with the large supporting band, which included guitars (lead, bass, slide), horns (trumpet, French), all kinds of saxes, strings (violin, cello), two drum kits, bongos, a penny whistle, accordion and washboard for "Zydeco," various synths and a Hammond B3.

The show started with Simon and Sting together, singing "Brand New Day," "Boy in the Bubble" and "Fields of Gold." Then Sting soloed on "Every Little Thing She Does is Magic," "An Englishman in New York," "I Hung My Head" (by Sting but recorded by Johnny Cash), and "Driven to Tears."

The pair performed "Walking on the Moon" and "Mother and Child Reunion." Their combined timbres didn't quite mix, but worked. Sting remains raspy but still hits the high notes. Simon modulated lower, but maintained resonant interpretations.

Simon and his crew then played "50 Ways," "Dazzling Blue" (with appropriate-colored lighting), "Graceland," "Still Crazy" (he was), and "Me and Julio." Sting rejoined for "Fragile," then sang Simon's "Look for America" by himself, saying it reminded him of his first tours of this massive country, before launching into "Message in a Bottle," "Hounds of Winter," "They Dance Alone," "Roxanne" (with appropriate-colored lighting), and "Desert Rose."

The duo delivered "The Boxer" together, then Simon offered "Hearts and Bones," "Obvious Child," "Diamonds" and "Call Me Al." The final combo songs were "Every Breath You Take" and "Late in the Evening." To end the night, Sting and Simon sang a haunting acoustic version of "Bridge Over Troubled Water." Their encore "When Will I Be Loved?" was dedicated to Phil Everly, who died in January. The piped-in, post-show piece was Sinatra's version of "Mrs. Robinson." Coo coo ca-choo.

Sting released his album "The Last Ship" in September, and will soon preview the stage musical version in Chicago, followed by a Broadway run. Simon released his 12th studio album "So Beautiful or So What" in 2011. Both remain consummate craftsmen who scratch different itches. 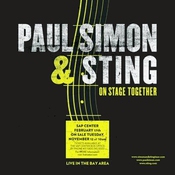