Sting makes a buzz in return to The Sage... 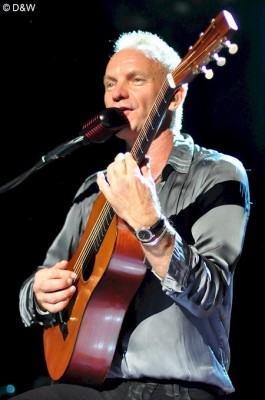 Sting and the Northern Sinfonia joined forces last night at The Sage Gateshead. Their joint mission: to add orchestral lustre to a back catalogue stretching back to the days of punk.

This was just the latest stop on a world tour which has already traversed North America and still has much of Europe and The Rest of the World to come.

The Symphonicities tour, supporting the summer's 10th studio album, represents the latest musical exploration by a man who long ago reached a level of fame and fortune that pretty much allows him to do what he wants.

Gone was the Ancient Mariner's beard which accompanied him to this venue back in December for the folk-orientated Sage fifth birthday concert.

In its place was a sleek, clean-shaven Sting, sporting quite possibly the tightest trousers ever to hug the legs of a 59-year-old son of Wallsend. And many of us being die-hard fans, we knew that they did not account for the extraordinary high note he held for what seemed an eternity at the end of 'When We Dance' - a duet with reed-thin but sexy backing singer Jo Lawry.

With the black-clad Sinfonia musicians behind him - in truth, this was probably money for old rope as far as they were concerned - and with some trusty instrumentalist friends ranged across the stage, Sting served up the famous and the lesser-known songs. As two rectangular screens hovered above, focusing in on the musicians (but mostly on Sting), the concert opened with 'If I Ever Lose My Faith In You'.

A stately, cinematic version of 'Roxanne' came up quite quickly, the curtain at the back of the stage turning from blue to red, and the first half ended in rocky style with 'Next To You'.

Highlight for me was 'An Englishman In New York' - or "Noo Yark", as he pronounced it in very un-English style.

There was a bit of banter, reminiscences of his father, growing up in "Waallsend" and the miners' strike. There were welcome guest appearances from the Tickells, Peter and Kathryn, and there was much to enjoy from a man who this week has backed campaigns to preserve The Journal Tyne Theatre and bring us World Cup footie.

He always creates a buzz, does Sting. Long may it continue.

Oct 5, 2010
Sting to become honorary president of Tyne Theatre...
North East rock legend Sting is among a group of showbusiness legends who have lent their support to one of the region's most historic cultural buildings.
Read more
+